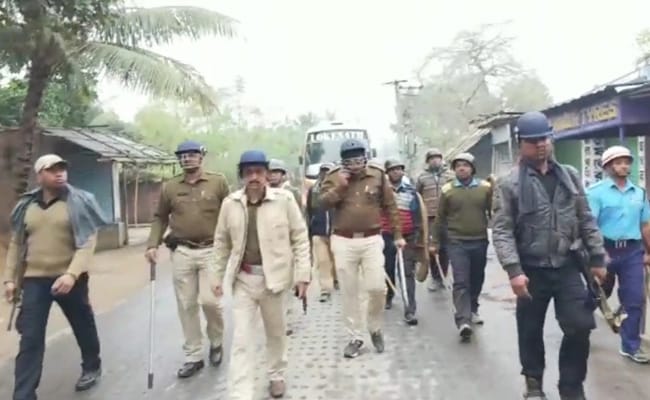 There is heavy police presence in Jalangi area of Murshidabad.

A political slugfest has erupted over the clash at Sahebnagar in West Bengal's Murshidabad district, in which two people were killed today. The police have confirmed the cause of death was injuries from bomb splinters and gunshots. Three people have been detained for what eyewitnesses claim was a sudden attack by miscreants at a roadblock set up at Sahebnagar village as part of an anti-Citizenship Amendment Act and National Register of Citizens bandh call issued by a local group called Nagarik Manch.

Members of the families of the victims claimed a local Trinamool leader was present in a vehicle that suddenly drove up to the roadblock and opened fire. Some motorcycle-borne miscreants were also present.

They fired and hurled bombs at the bandh supporters, locals claimed, some of whom named the Trinamool Jalangi block chief, Tahiruddin Mondal.

The Trinamool chief of Murshidabad district, Abu Taher, denied the involvement of any party leaders. "Let the police investigate and take action against those responsible. No one from our party is involved," he said during a press meet in the evening, adding, "No party leader or worker is involved."

Tahiruddin Mondal himself surfaced hours after the incident and claimed the Congress and CPM were behind the incident.

"Those naming me have been tutored to say so. They are making false allegations. My own brother was shot in the foot. Did I shoot my own brother? They did," he said. "Why had they blocked roads? They had planned to attack me. The Congress and CPM jointly plotted this," he added.

But both the Congress and CPM have hit back and claimed the incident exposed the Trinamool's doublespeak.

"The true character of the TMC got exposed today," said CPM leader Mohammad Salim. "Mamata Banerjee does not want anyone to hold agitations against the Narendra Modi government. Only they will do CAA CAA. Two people have been shot dead. Dilip Ghosh set the agenda and Trinamool executed it."

Congress MP Adhir Chowdhury, who belongs to theb Murshidabad district, said, "There was no agitation, no trouble. Suddenly a local TMC leader arrived with his mastan vahini (goons) and attacked the anti-CAA protestors. Mamata Banerjee is protesting against CAA. Why are her people attacking other protestors? Because Mamata Banerjee does not support bandhs? So Trinamool attacks completely innocent people, and the police does nothing."

Murshidabad saw violent anti-CAA protests immediately after the Act came into being in December.

Several trains were burnt and railway stations ransacked. Local sources suggest that the All India Majlis e Ittehadul Muslimeen or AIMIM led by Asaduddin Owaisi has been increasing its footprint in Murshidabad district and may have had some links with the December clashes.

Local sources say that the bandh call in Jalangi today may have been given by an outfit fronting the MIM. This could, however, not be confirmed independently from any officials of MIM or Nagarik Manch.