After Trouble With Allies, Ram Madhav Hints At BJP's Plan B

Ram Madhav said the BJP was working to bring new allies into its fold, "especially in south India and the eastern India". 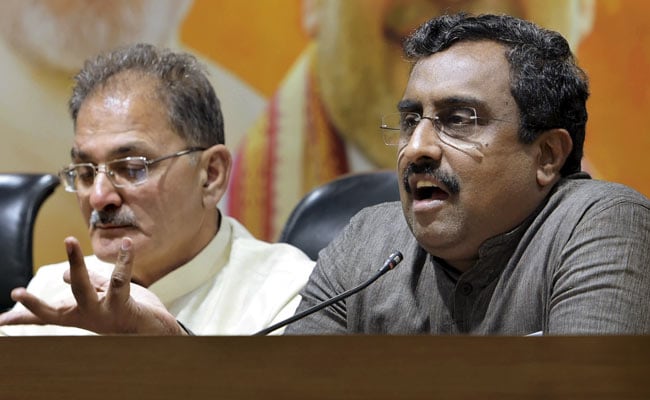 The setback in the recent assembly elections has come with a troublesome spin-off for the BJP. Allies in the states have started speaking up, demanding a bigger share of seats and respect. Amid the murmurs of discontent, senior BJP leader Ram Madhav on Wednesday gave a glimpse of the BJP's roadmap on alliances in the run-up to the next year's national elections.

"Alliance politics is all about accommodation and adjustment and for that, the BJP is ready," Ram Madhav said. "It is true that certain smaller allies like Kushwaha have decided to leave us, but we are working on bringing new allies into our fold, especially in south India and the eastern India."

With months to go for the Lok Sabha elections, the BJP is short of three allies. Chandrababu Naidu's Telugu Desam Party had walked out in March. In June, the BJP ended the alliance with Mehbooba Mufti. The latest to walk out was Upendra Kushwaha in Bihar.

Last week, the BJP sorted its differences with Ram Vilas Paswan, allotting it two more seats, one in Lok Sabha and the other in Rajya Sabha.  But yesterday, Apna Dal, a regional player in Uttar Pradesh, said it would boycott all government programmes in Uttar Pradesh unless the BJP's central leaders looked into its complaints.

Mr Madhav did not name any party as a potential new ally.

There has been speculation for long about Tamil Nadu's ruling AIADMK as a possible ally for the ruling party at the centre - an idea triggered by the ruling party's warm welcome to Prime Minister Narendra Modi when he went to Chennai for a function.

There has also been speculation about Rajinikanth, who is a new entrant to politics. The state's opposition DMK has repeatedly claimed that the actor-politician will eventually join the BJP.

Telangana Chief Minister K Chandrashekar Rao, who is pitching for a non-Congress, non-BJP front, has been accused by the Congress of being the BJP's "B Team".

In the east, Odisha Chief Minister Naveen Patnaik, who has tried to maintain equal distance from both the Congress and the BJP, had earlier offered issue-based support to the BJP.

His party supported NDA candidate Harivansh Narayan Singh for the Rajya Sabha deputy chairman's post when Prime Minister Narendra Modi dialled the Chief Minister. The eight votes of his party helped the government win what would otherwise have been a close-fought election.