After SMS Demanding Explanation, an Apology in Case of Officer vs Chief Minister 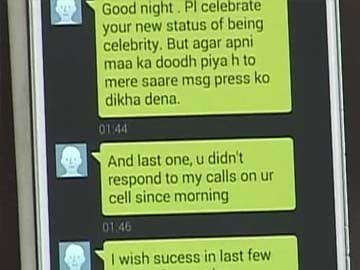 New Delhi: The text message sent to Haryana bureaucrat Pradeep Kasni did not sound innocuous. "Good night... please enjoy your new status of being a celebrity... But agar apni maa ka doodh piya h to mere saare msg press ko dikha dena (If you are a man, I dare you to show my messages to the press)."

The SMS was from his boss SC Chaudhary, the top bureaucrat in the Haryana government, and it arrived hours after Mr Kasni refused to go along with a controversial move by Chief Minister Bhupinder Singh Hooda of the Congress.(Another Khemka. Haryana Bureaucrat Challenges Chief Minister Hooda)

Mr Chaudhary told reporters today that his text message was being misrepresented as a threat and in another SMS to Mr Kasbni, he wrote, "SMS was sent in lighter vein, treat you like brother."

On Sunday, the new Governor of the state, BJP nominee Kaptan Singh Solanki, had just taken charge when the Chief Minister swore in five important officers to serve on the Right to Information and Right to Service Commissions which are meant to empower citizens by helping them access information about government decisions.

Mr Kasni refused to sign the appointment letters for the officers who were administered their oaths by the chief minister - a role usually reserved for the Governor, and a process that could be challenged in court. Mr Kasni also says the people chosen by the chief minister do not meet the criteria needed for their posts. He now says he will discuss the text message and other details "at an appropriate forum."

He has been supported by another bureaucrat, Ashok Khemka, who challenged Mr Hooda and his government for allegedly bestowing sweetheart land deals in Haryana to Robert Vadra, the son-in-law of Congress president Sonia Gandhi, charges denied by Mr Hooda and his party.

The Chief Minister claims that he was authorised by outgoing governor Jagannath Pahadia to appoint the commissioners. But the BJP says the new governor's permission should have been sought.