After Pulwama, 2,500 Young Kashmiri Men Apply For 111 Vacancies In Army

"This is a great opportunity for us. We wish that more vacancies are offered to us," a candidate at an Army recruitment drive in Jammu and Kashmir said

Less than a week after a suicide car bomb attack on a CRPF convoy killed 40 soldiers in Jammu and Kashmir's Pulwama, at least 2,500 young men in the state turned up at an Army recruitment drive in Baramulla district - against a vacancy of 111.

While it is not uncommon for thousands of men to make a beeline to recruitment camps of the armed forces in Jammu and Kashmir, where unemployment is a problem, the turnout against 111 vacancies is an encouragement for youth to earn a livelihood of respect and serve the nation, officials said.

"By joining Army, we can serve the nation and also protect our families and take care of them as we hardly have any employment opportunities in the valley," a candidate at the recruitment drive in north Kashmir's Baramulla, 75 km from Srinagar, told news agency ANI.

Another candidate said, "We cannot go outside Kashmir. This is a great opportunity for us. We wish that more vacancies are offered to us. If Kashmiri personnel will be deployed in the sensitive areas then they can talk to the people and deal with the ongoing crisis." 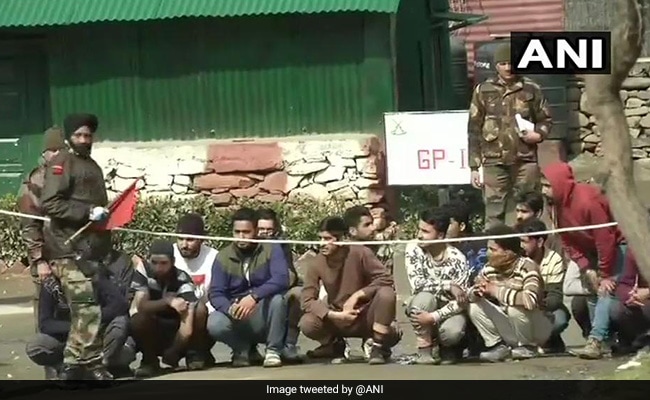 Some 2,500 candidates turned up at the Army recruitment drive in Baramulla

In 2016, unemployment rate in Jammu and Kashmir was higher than the national average, with the state having 24.6 per cent population in the 18-29 years age group as unemployed, according to the Economic Survey 2016.

One of the main reasons identified by the Jammu and Kashmir government, in its Economic Survey 2017, for high unemployment rate was "unsupportive administrative and regulatory framework and lack of transparency."

The other reasons were cumbersome business registration procedures and costs, lack of business assistance services and absence of single-clearance window system.