After Pragya Thakur, Another BJP Lawmaker Praises Godse As "Nationalist"

Usha Thakur, a Madhya Pradesh legislator from Dr Ambedkar Nagar or Mhow, said that Godse was "a person who was concerned about the nation throughout his life". 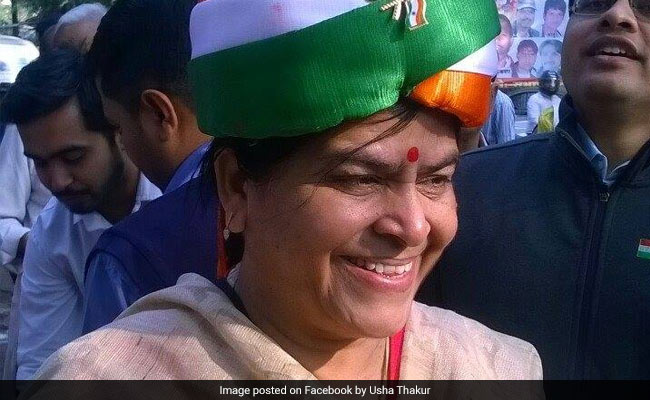 Usha Thakur is a BJP lawmaker from Mhowm and also Vice President of the party's state unit.

After outrage over the BJP's Pragya Singh Thakur  glorifying Mahatma Gandhi's assassin Nathuram Godse, another lawmaker of the party in Madhya Pradesh has described him as a "nationalist". Usha Thakur, a legislator from Indore, says Godse was "a person who was concerned about the nation throughout his life".

The comment has emerged from another BJP leader despite party president Amit Shah sending notice to Pragya Thakur and Prime Minister designate Narendra Modi saying he would "never forgive leaders who glorified Godse".

Usha Thakur also said on Mahatma Gandhi's assassination: "What the circumstances where due to which he (Godse) took this decision, only he would know. I think you or I should not even comment on it".

Usha Thakur is the vice president of the BJP's Madhya Pradesh unit. No stranger to controversy, she had sparked a row in 2014 when she said that Muslims should be barred from the "Garba" or a Gujarati dance festival held in several northern states.

"We have got data that during the Garba, on an average, four lakh girls convert to Islam every year. So we have started this awareness drive," she had told NDTV.

A state leader of the BJP called the uproar over her remarks "unwanted controversy" over edited remarks.

"As far as (Usha) Thakurs video on social media is concerned, I think it is an edited version and an unwanted controversy is being created by just catching a particular word," he said.

The Congress has challenged the BJP to expel both Usha Thakur and Pragya Thakur. "These statements have revealed the true face of the BJP," said state Congress spokesman Neelabh Shukla. He also demanded that the two leaders apologise to the nation for their "poisonous" statements.

Weeks earlier, Pragya Singh Thakur, now a BJP parliamentarian, had praised Godse as a "patriot". "Nathuram Godse was a deshbhakt (patriot), is a 'deshbhakt' and will remain a 'deshbhakt'. People calling him a terrorist should instead look within, such people will be given a fitting reply in the election," she had said on the campaign trail.

The BJP denounced and disowned her comments, and she eventually had to apologise. Party chief Amit Shah had asked Pragya Thakur to explain her comments to a disciplinary committee within 10 days. The deadline for the notice ended on Monday, and so far there has been no word of it from the BJP.

PM Modi had publicly censured her comments in an interview to television channel News24. "The comments on Gandhi and Godse are deplorable, disgusting and are not language fit for civilized society. Those who say such things should think 100 times. It is a different issue that they have apologized, but I will not be able to forgive them from my heart," he had said.

More recently, addressing the BJP-led National Democratic Alliance for the first time since his massive victory, he cautioned lawmakers against making statements on the media. His warning which was seen to be directed at Pragya Singh Thakur.

Along with Pragya Thakur, Union Minister Anant Kumar Hegde and lawmaker Nalin Kumar Kateel were also asked by Mr Shah for an explanation.

Nalin Kateel compared Godse with former Prime Minister Rajiv Gandhi, who has been a chief target of the ruling party in the national election campaign nearly 30 years after his assassination. Mr Hegde had tweeted that "seven decades later, the condemned were being heard".

Both the tweets vanished from their Twitter timelines. Anant Kumar Hegde put out a message claiming his account had been breached.