Besides the Chardham shrines of Kedarnath, Badrinath, Gangotri and Yamunotri, power supply is also being provided to some Indo-Tibetan Border Police posts on the border near Mana in Chamoli district. 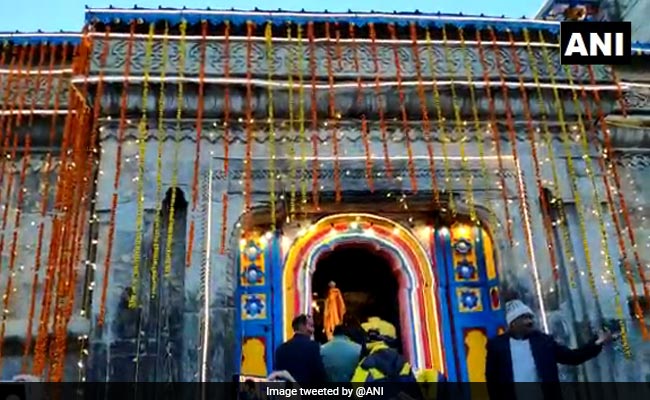 After Prime Minister Narendra Modi's pilgrimage to Badrinath and Kedarnath, the Uttarakhand government has decided to provide uninterrupted power supply to all the four highly revered Chardham shrines.

Besides the Chardham shrines of Kedarnath, Badrinath, Gangotri and Yamunotri, power supply is also being provided to some Indo-Tibetan Border Police (ITBP) posts on the border near Mana in Chamoli district.

"We are strengthening our power supply system so that the power remains undisrupted 24X7 in all the four Chardham shrines of Kedarnath, Badrinath, Gangotri and Yamunotri," said Uttarakhand Power Corporation Ltd (UPCL) Managing Director BCK Mishra.

UPCL is the sole government-run power distributing company (discom) in the state.

Mr Mishra recently visited the Badrinath and Kedarnath areas to inspect the power supply system at the two shrines which hundreds of pilgrims visit every day.

For Kedarnath, the UPCL will install a 33 KV sub-station at a cost of Rs 10 crore at Sonprayag in Rudraprayag district for strengthening the supply system at Kedarnath.

"Once this sub-station is installed, we will be able to give undisrupted power supply to Kedarnath. Sometimes, the electricity trips as the power lines are very long," Mr Mishra said.

Similarly, a 33 KV sub-station is being set up at Pandukeshwar in Chamoli district near Badrinath for strengthening the power supply system.

"Through this move, we will also be able to supply power to some ITBP posts near Mana," the official said.

For Gangotri, the UPCL will take over the 33 KV sub-station of NTPC at Dabrani in Uttarkashi district, which was built for the 660 MW Loharinag Pala hydel project but was later scrapped on environmental grounds by the previous UPA government.

For improving power supply to the Yamunotri shrine, efforts are on to strengthen the power supply system at Barkot in Uttarkashi district, Mr Mishra said.

"When we take shutdowns during faults, the electricity goes off in the whole shrine. But now we will make sure that during any fault, the power supply remains undisturbed in these highly revered shrines," he added.