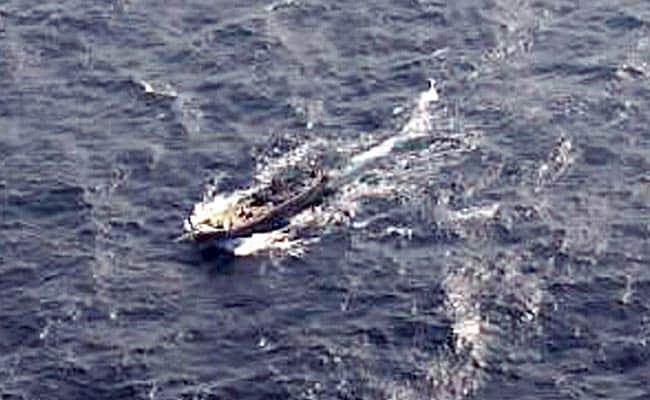 New Delhi: The Coast Guard has increased surveillance along the Gujarat coast, after a Pakistani boat blew itself off Porbandar on New Year's Eve.

He also said that authorities are searching the boat but nothing has been found yet. (Pakistani Boat Blows Up Off Gujarat Coast: Unanswered Questions)

Intercepts picked up by intelligence agencies on December 31 revealed that the boat was carrying "costly cargo" headed for India. A second intercept revealed that those who were to receive the cargo "had been paid and were ready."

The National Technical Research Organisation (NTRO), a technical intelligence agency, picked up phone intercepts from Keti Bunder - a small fishing port north of Karachi. The Ministry of Defence (MoD), in a written statement issued on Friday, said the boat was "planning some illicit transaction in Arabian Sea." A transaction is necessarily between two parties. (Pakistani Boat Was Carrying Explosives: Read Government Statement)

A Dornier aircraft was launched at 11.30 am to search for the suspicious boat. Two more aircraft were launched later. The first Dornier aircraft spotted the Pakistani boat at around 12 noon, when it was 15 nautical miles in Indian waters and moving very slowly.

The Coast Guard ship "Raj Rattan" was sent after the boat. When it found the Pakistani boat, it was "sitting quietly without lights."

The boat, when asked to switch on its navigational lights, only moved away and changed its course several times to throw off the Coast Guard. "It had no intention of stopping, surrendering or getting caught," said a Coast Guard official.

The "hot pursuit" lasted for about an hour. The boat allegedly slowed down because it was low on fuel.

At around 3 am on Thursday, a sudden fire started on the Pakistani boat, followed by an explosion. Four men were seen on the deck before it sank. (18-Hour Operation to Find And Stop Pakistani Boat)

Senior Coast Guard officer Kirpa Ram Nautial told NDTV the boat did not blow up accidentally, it was deliberate.