Sources in the BJP say the final number of defectors from the Congress could be 26.

From the BJP for Rajya Sabha, it will be Jyotiraditya Scindia and Sumer Singh Solanki

After its acquisition of Jyotiraditya Scindia, one of the Congress's top leaders in Madhya Pradesh, the BJP is aiming for not one, but two Rajya Sabha seats. Besides announcing the high-profile defector for one Rajya Sabha seat, the BJP also named a second candidate.

On Thursday, senior Congress leader Digvijaya Singh filed his nomination for the Rajya Sabha election on March 26. From the BJP, it will be Jyotiraditya Scindia and Sumer Singh Solanki.

Just days ago, the three Rajya Seats in Madhya Pradesh due for elections were tipped to be split two to one between the Congress and the BJP.

The Congress was almost certain to win two seats and the BJP, one, in the election that is based on voting by MLAs.

The situation changed after Jyotiraditya Scindia's stunning switch from the Congress to the BJP yesterday. The move came with a bonus for the BJP -- 22 Congress MLAs willing to follow their "Maharaj". That brings the possibility of not just toppling the Kamal Nath government with its shaky majority, but also winning a second seat in the Rajya Sabha, where the government is in a minority.

Sources in the BJP say the final number of defectors from the Congress could be 26. 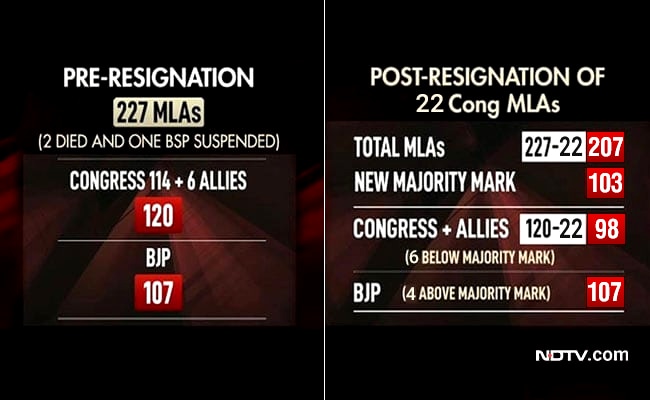 "There was no problem with a Rajya Sabha seat. If I knew Scindia wanted a Rajya Sabha ticket, I would have given it to him," said Mr Singh today.

"But we could have only made him Rajya Sabha MP, we couldn't have made him a minister," added the former chief minister, referring to reports that after he becomes a Rajya Sabha member, he will also be given a spot in Prime Minister Narendra Modi's cabinet.