After Diljit Dosanjh Photoshops Picture With Her, Ivanka Trump Replies

Ivanka Trump also shared other photoshopped images of her and wrote, "I appreciate the warmth of the Indian people." 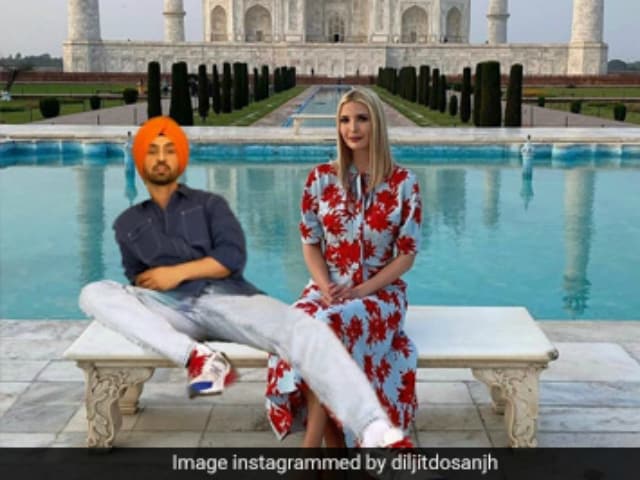 Ivanka Trump, who was in India last week along with husband Jared Kushner, US President Donald Trump and First Lady Melania Trump, replied to Diljit Dosanjh on Twitter on Sunday after the singer put up a photoshopped picture of him with Ms Trump.

Singer-actor Diljit Dosanjh had earlier shared a hilarious picture of himself with Donald Trump's daughter in front of the Taj Mahal on Instagram and on Twitter.

He had captioned the photo: "Me and Ivanka. Piche hee pey aaee, kehndi Taj Mahal kana, Taj Mahal jana... Mai fer ley geya hor ki karda (She was after my life to take her to Taj Mahal. So I took her, what else could I have done)?"

A senior advisor to the Trump administration, Ivanka Trump, retweeted Mr Dosanjh's post and wrote: "Thank you for taking me to the spectacular Taj Mahal, @diljitdosanjh! It was an experience I will never forget!"

Thank you for taking me to the spectacular Taj Mahal, @diljitdosanjh! ???? 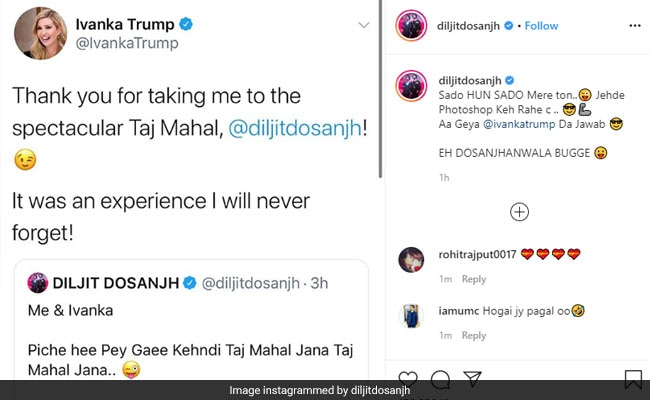 Diljit Dosanjh is known for his admiration for Kylie Jenner and actress Gal Gadot and he often comments on their Twitter posts.

Ms Trump also shared other photoshopped images from her India tour posted by users on Twitter and wrote: "I appreciate the warmth of the Indian people. ...I made many new friends!!!"

I appreciate the warmth of the Indian people.

In 2017, Ivanka Trump had visited India for the first time to attend the Global Entrepreneurship Summit in Hyderabad. She attended the event along with Prime Minister Narendra Modi.