After calling ordinance on convicted lawmakers 'nonsense', Rahul Gandhi reaches out to PM 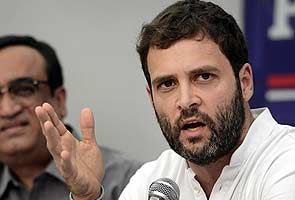 New Delhi / Washington DC: In a message to the Prime Minister, after he dropped a bombshell at a press meet in Delhi on Friday, Rahul Gandhi admitted that his views on the controversial ordinance on convicted lawmakers were "not in harmony with the Cabinet decision or the Core Group's view."

Rahul Gandhi's dramatic declaration that an ordinance hurriedly pushed by the government to protect convicted MPs and MLAs is "complete nonsense," has put Prime Minister Manmohan Singh in an embarrassing spot while away in the US.  Mr Gandhi suggested that the ordinance "should be torn up and thrown away." (Blog: When Rahul finally met the press and dropped a bombshell)

In his letter to the Prime Minister, the Congress Vice-President who seemed to be in damage control mode acknowledged that the ordinance had been signed off by top Congress leaders.
"I also know it would be exploited by our political opponents. You know that I have the highest respect for you and I look up to you for your wisdom. I have nothing but the greatest admiration for the manner in which you are providing leadership in extremely difficult circumstances," Mr Gandhi wrote. (Read Rahul Gandhi's letter to the PM)

The 43-year-old leader ends his letter by saying he hopes the PM "will understand the strength of his conviction."

The placatory e-mail came after the Congress's political rivals said Mr Gandhi's veto has undermined the Prime Minister's position. "I think the PM stands diminished. Here is a cabinet which takes a decision, I do believe it was a wrong decision... and it is now a grandstanding by a party functionary in order to show who is the boss," senior BJP leader Arun Jaitley told NDTV. (Political reactions to Rahul Gandhi's statement: who said what)

Amid reports that the government is now likely to withdraw the ordinance, Dr Singh said in Washington, "The Congress Vice-President has also written to me on the issue and also made a statement... The issues raised will be considered on my return to India after due deliberations in the Cabinet." (Read PM's statement)

Sources say the PM has spoken to Congress President Sonia Gandhi from Washington on this issue and she has assured him of the party's support. Mr Gandhi seemed to underscore a divide between party and government, when he said, "I personally think what the government is doing on the ordinance is wrong." (Watch)

The ordinance overturns a Supreme Court order that elected representatives convicted and sentenced to over two years in prison will be disqualified immediately; it provides that such MPs and MLAs can continue in office, without salary or voting rights, if a higher court stays the conviction on appeal. (Read)

The ordinance was cleared by the cabinet on Tuesday and sent the next day to President Pranab Mukherjee, who called three union ministers last night reportedly to discuss his own reservations on it. (Read)
Comments
Rahul GandhiManmohan Singh