After a Year of Outsize Expectations, Modi Adjusts His Political Course 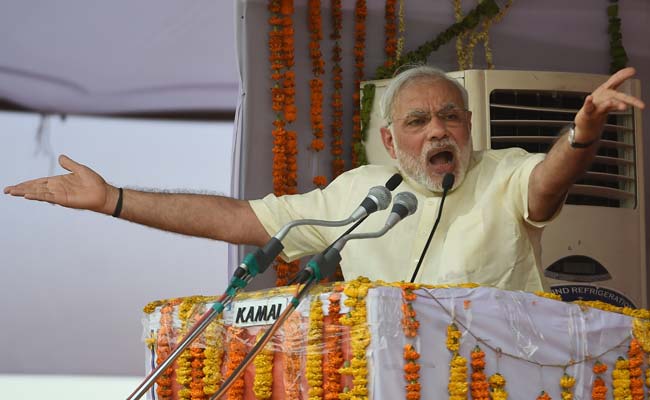 Prime Minister Narendra Modi addresses a rally at Mathura on 25 May, 2015. (Agence France-Presse)

New Delhi: Standing before India on the first anniversary of his swearing-in, Prime Minister Narendra Modi on Monday gave a speech that was notable for the subjects it avoided: Large-scale job creation. Manufacturing. Urbanization.

Modi instead delivered an ode to struggling India. During the speech in Mathura, a town about 90 miles southeast of Delhi, he lavished attention on farmers and said that mom-and-pop traders, not "big industrialists," should be India's crucial driver of job growth. Most of all, he praised the poor, who he said "will become my warriors."

The shift was telling. After soaring through India's political stratosphere on the economic promise "achche din aa gaye," or "better days are coming," Modi must face the reality that much of his agenda is still only potential.

From abroad, India is now seen as a bright spot, expected to pass China this year to become the world's fastest-growing large economy. But at home, job growth remains sluggish. Businesses are in wait-and-see mode. And Modi has political vulnerabilities, as parliamentary opposition leaders block two of his central reform initiatives and brand him "anti-poor" and "anti-farmer."

Most formidable of all is a problem Modi has made for himself: outsize expectations that he would sweep away constraints to growth in India, like stringent laws governing labor and land acquisition.

"Their image became larger than they themselves," Vimarsh Razdan, senior vice president at Orient Craft, one of India's largest garment exporters, said of Modi's government. "They have become superheroes. And everyone knows superheroes don't exist."

A year ago, businesspeople were awaiting Modi's arrival in New Delhi with eagerness and a bit of apprehension: In Gujarat, the state he led for almost 13 years as chief minister, he was known for his concentration of personal power, his dislike of red tape and his sometimes intimidating manner.

Since then, India's business culture has indeed changed, chief executives say. They rejoice that they no longer have to notarize all documents submitted to the government and say that it is far easier to find bureaucrats at their desks during the workday.
Sudhir Dhingra, the founder of Orient Craft, says that only about one-third as many inspectors are showing up at his factories and that they are "fearful of accepting money."

Modi has built a centralized system that requires business deals to be routed through his office. Gone are the informal meetings that business leaders used to hold with ministry officials, often to hash out policies regulating their sectors.

As for Modi, business leaders have found it hard to cultivate him socially.

"This one year has taught the businessmen one thing: Meeting him at weddings, or meeting him at seminars or whatever, doesn't give them any advantage," said Rajeev Chandrasekhar, an independent member of the upper house of Parliament and a technology entrepreneur.

"For me, and I have been around for a while, this is very, very unusual," he said. "A lot of people are having sleepless nights because of that."

By most measures, India's economy has had a good year. India is heavily reliant on imported oil, and plunging prices have cut the cost of government fuel subsidies, allowing the authorities to rein in a chronic budget deficit. Inflation fell to 4.87 per cent in April. Foreign direct investment rose by more than 25 per cent, to $28.8 billion in the 2014-15 fiscal year.

The government has introduced a flurry of changes: It has deregulated prices for diesel, petroleum and cooking gas, and raised limits on foreign investment in the defense and insurance sectors to 49 per cent. It has opened 125 million bank accounts for poor families, with the goal of eventually replacing food and fuel subsidies with cash transfers to prevent corruption. Coalfield leases, found to have been sold at artificially low prices, were reallocated through a transparent process; so were telecom spectrum allocations.

Those urging Modi to introduce deep structural reforms, however, have been disappointed.

Raghuram Rajan, the governor of the Reserve Bank of India, told an audience in New York last week that many people saw Modi as "Ronald Reagan on a white horse" coming to slay anti-market forces, and that the image was "probably not appropriate."

He added that the government "has taken steps to create the environment for investment, which I think is important."

Modi's only truly risky change to date - muscling through an executive order easing the government's ability to obtain land for development - backfired this spring when he tried to transform it into a permanent law. The proposed law met a wall of protest from a rejuvenated opposition declaring that Modi was "anti-farmer."

Charges of cozying up to business must sting for Modi, said Shekhar Gupta, a journalist, especially after his party's crushing defeat in February elections in Delhi. He was criticized there for wearing a customized suit with pinstripes made of embroidered script spelling his name.

"It's taken away from him the basic image of a tea-seller who became a country's leader in his own right," Gupta said.

Corporate grandees have their own grievances with Modi, which they are increasingly willing to express. Deepak Parekh, chairman of HFDC Bank, complained that procedures for obtaining funds had become more onerous, not less so, under the new government. And he described "a little bit of impatience creeping in as to why no changes are happening."

Jayant Sinha, a former investment fund manager who is now the minister of state for finance, said these complaints were the natural result of fiscal and monetary consolidation that the government has undertaken to control inflation. Their "economic pain" will ease over the next several months, he said, as the investment cycle picks up.

"Everyone is saying, after a year, 'Where are the good days? Why hasn't growth picked up?'" Sinha said. "It is natural for them to feel challenged in an environment like that. Analysts and economists, forward looking, feel that India is on a very sound footing and feel we can now drive hard for growth."

The Reserve Bank of India, he added, "can cut rates now."

Opinion polls suggest that Modi remains quite popular, with approval ratings upward of 60 per cent, even where there is little evidence of economic improvement.

On a dusty roadside in Greater Noida, outside Delhi, on Monday, Gaurav Dikshit, 24, a construction engineer, looked at the hulking shapes of a dozen half-finished high-rise apartment buildings, projects in limbo because of land litigation. Around him, billboards exclaimed: "Gold Coast Golf Course and Lake-Facing Luxury Apartments!" and "Aryan International School."
But Dikshit, who earns around $400 a month, has put his plans to move into the neighborhood on hold.

But he said he still had a feeling that things were going to turn around in Greater Noida. "If you plant fruit trees," he said, "it still takes some time to get fruit."
© 2015, The New York Times News Service
Comments
Narendra ModiGaurav DikshitShekhar GuptaDeepak ParekhRajeev ChandrasekharRonald ReaganRaghuram RajanIndiaModi's governmentJayant SinhaModi365