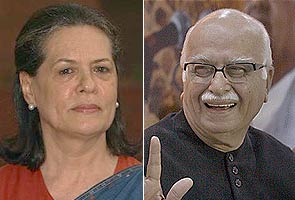 New Delhi:
Senior BJP leader L K Advani has expressed regret to Congress President Sonia Gandhi for a party appointed task force report, which had alleged that she and her late husband Rajiv had accounts in Swiss banks.

"She (Sonia Gandhi) should have denied the reports earlier, since names of her family members appeared so many times in various reports," said BJP spokesperson Ravi Shankar Prasad.

But, sources within the BJP have told NDTV that a large section of the party is unhappy because right from the beginning several senior leaders, including Sushma Swaraj and Arun Jaitley, were opposed to attacking the Gandhi family on the black money issue. The worry in the BJP now is how the party is going to continue its protest on the issue.

NDTV has also learnt that several leaders are now saying the black money report was a party document and Advani shouldn't have discussed Sonia's letter with party leaders.

BJP had appointed the task force on unravelling the amount of black money stashed by Indians in foreign banks and ways to bring it back.

Promoted
Listen to the latest songs, only on JioSaavn.com
On February 1, NDA leaders had released a booklet 'Indian Black Money Abroad in Secret Banks and Tax Havens', the second report of the task force appointed by the BJP.  The report said that Sonia Gandhi and former Prime Minister Rajiv Gandhi were among Indians who held Swiss bank accounts.