Lok Sabha To Form Committee To Look Into Ruckus In House

Within minutes of the house opening for business today, opposition leaders again demanded a discussion on the clashes in Delhi over the Citizenship (Amendment) Act or CAA that left 53 dead and hundreds injured 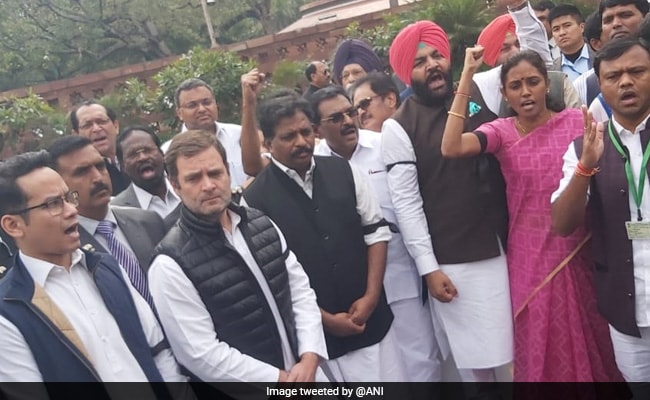 The Lok Sabha will form a committee to look into ruckus in the house that prevented routine business in the last three days over the opposition's demand for a discussion on the recent violence in Delhi over the controversial citizenship law. The chairman of the committee will be the Speaker himself, Om Birla, who has stayed away from the house for a third day after the opposition's protest, despite requests by leaders to return.

Within minutes of the house opening for business today, opposition leaders again demanded a discussion on the clashes in Delhi over the Citizenship (Amendment) Act or CAA that left 53 dead and hundreds injured. The house was then adjourned till 2 pm. The Rajya Sabha, however, has been adjourned till March 11.

The opposition leaders also demanded that seven Congress MPs who were suspended till the end of the budget session should be brought back. The BJP demanded that they should be removed from the house permanently.

The biggest ruckus took place on Monday and Tuesday, when members of the government and the opposition engaged in a scuffle and threw paper missiles at the chair.

Parliamentary Affairs Minister Pralhad Joshi said he would accept any decision that the chairman takes. "Such behaviour should not be displayed in the house. Earlier, inappropriate words were said against the Prime Minister and Amit Shah ji in the house but we did not do anything. The government doesn't want to keep any MP outside parliament. But what happened yesterday, never happened in the 70 years of independent India," Mr Joshi said, in a reply to Congress MP Adhir Ranjan Chowdhury.

The Lok Sabha passed the Mines and Mineral Laws (Amendment) Bill today amid the protests.

"It's very sad that we can't discuss the riots where there is loss of lives," DMK MP Dayanidhi Maran said.

"This suspension is totally disproportionate," said Supriya Sule of the Nationalist Congress Party, which is in alliance with the Congress and the Shiv Sena in Maharashtra.

Congress MPs led by Rahul Gandhi also gathered in front of Mahatma Gandhi's statue on the lawns of the parliament building today and shouted slogans against Home Minister Amit Shah over the recent violence in Delhi.