The chief secretary said the conduct of these elections will make a large amount of funds available to the state that will be used directly by the panchayats and urban local bodies in their respective areas. 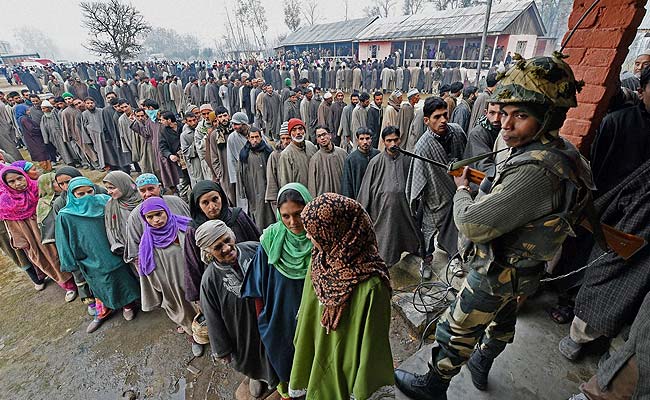 The Jammu and Kashmir government said today that it has taken adequate security measures to ensure free and fair polls to urban local bodies and panchayats in the state.

"We have made adequate arrangements for security for these polls. 400 companies of central forces will be deployed for these polls in addition to what we already have in the form of police and other paramilitary forces," state chief secretary BVR Subrahmanyam told reporters in Srinagar.

He said the government will provide security to all the candidates who request for it and facilitate their campaigning as well.

"We have arranged accommodation for the candidates who want it at various places across the valley. We have arranged 300 hotel rooms in Srinagar for this purpose," the chief secretary said.

Asked about the post election security plan for the candidates, Mr Subrahmanyam said, "We have even plans for those who win as they will be at a higher risk."

He said polling booths have been set up in clusters to ensure that the staff involved in the polls are provided security.

"The government staff involved in the conduct of elections will be provided one month's extra salary. This has never been done in any part of the country," the chief secretary said.

On the threat by terrorists to those who participate in the elections, Mr Subrahmanyam said, "That is being handled on the law and order front. There are threats... we are confident that we can handle it."

Asked if holding polls was prudent in view of the boycott by two major political parties in the valley, he said there was no question of thrusting the elections on the people.

"There is lot of enthusiasm on the ground. Two national parties (the BJP and the Congress) are participating. If you go to Jammu, you will see the street-level campaigning," he added.

The chief secretary said the conduct of these elections will make a large amount of funds available to the state that will be used directly by the panchayats and urban local bodies in their respective areas.

"The state may lose Rs 4,335 crore in funds (Rs 3,029 crore for panchayats and Rs 1,306 for ULBs) if these polls are not held. These funds do not come to the state government but directly to these bodies," he added.

"In addition to the grants under the 14th Finance commission, the funds of various schemes like the MNREGA, the PMAY, the NRLM and the mid-day meal scheme will be routed through panchayats. Each panchayat will have Rs 50 lakh to Rs one crore funds available for local development.

"Each panchayat will have an accountant for keeping books while an ombudsman will be appointed for transparency and accountability. The panchayats can levy taxes at local level as has been done in some parts of the country," he added.