'Am I A Fool To Return My Awards?' Says Actor Prakash Raj

Prakash Raj, who began his career in Kannada films but has acted in Tamil and Malayalam movies too, was reportedly a close friend of journalist Gauri Lankesh. She was murdered last month. 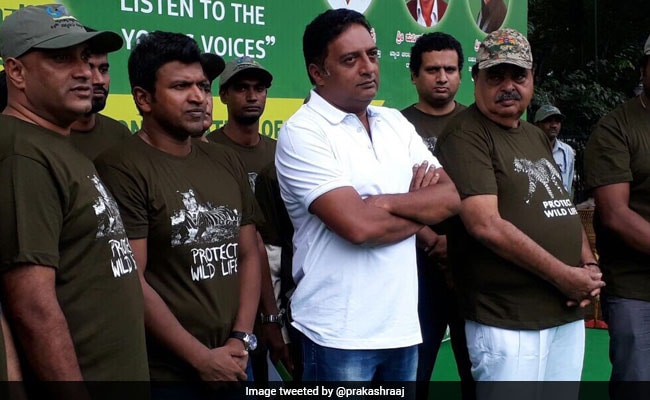 Bengaluru: Prime Minister Narendra Modi's silence on the unsolved murder of journalist Gauri Lankesh is why noted southern actor Prakash Raj says his five National Awards are deserved by "bigger actors" including the PM. The actor also said that he has been misquoted as saying he wants to return those awards. "I am not such a fool to give back the National Awards which has been given to me for my body of work and which I am very proud of."

Gauri Lankesh, a critic of right-wing ideology and a fierce advocate of secularism, was shot as she returned home early in September from her office in Bengaluru. The 55-year-old published a weekly paper.

Nobody has been arrested yet; the killer is seen wearing a helmet on security cameras at her home.

After her murder, some Twitter users abused her for her leftist ideals and celebrated her killing. PM Modi follows some of those accounts. Ms Lankesh's murder and the invective against her triggered national protests which alleged that her killing proves an intolerance of dissent.

"Some people who are followed by our Prime Minister on Twitter are so brutal, and we have a PM who has closed his eyes to it. If you see videos today from Uttar Pradesh, you will be confused if he (Yogi Adityanath) is the Chief Minister or the pujari (priest) of some temple. We have people doing such double roles," Prakash Raj said angrily yesterday in Bengaluru. "They have given me five National Awards. I feel like giving it to them. These are bigger actors than me."

Today, he said that he has been trolled for his comments but remains committed to making his point.

"I am disturbed, hurt, I am afraid of the silence of my Prime Minister," he said.

Prakash Raj began his career in Kannada films but has acted in Tamil and Malayalam movies and was a close friend of Ms Lankesh.

BJP spokesperson Nalin Kohli, however, said that Prakash Raj should target his anger at the Congress because it runs Karnataka. "It is a case of misplaced priorities because what this gentleman should have done is actually ask the question to the Congress government of the state because the police come under the state. Why haven't they found the killers?" Mr Kohli told news agency ANI.
Comments
Prakash RajPM Narendra ModiGauri Lankesh murder