Sources in the RSS say that Accenture Managing Director Rama Ramachandran had earlier agreed to be present at the event. 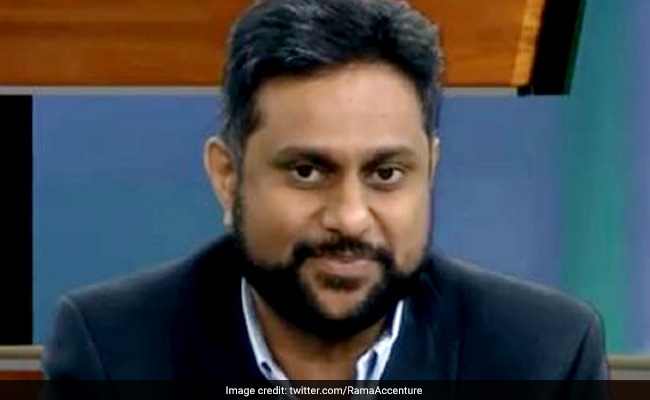 Rama Ramachandran is the Managing Director of IT giant Accenture.

Rama Ramachandran, the Managing Director of IT giant Accenture, has reportedly pulled out of an event organised by the Rashtriya Swayamsevak Sangh (RSS), the BJP's ideological mentor, in Chennai next month.

The move follows a massive backlash on social media, seeking a boycott of Accenture and Zoho, another tech giant whose top bosses had agreed to participate in the event amid nationwide protests against the citizenship law.

In the revised invite, Mr Ramachandran's name has been deleted. Sources in the RSS said that Mr Ramachandran had earlier agreed to attend the event titled "Resurgent Bharath".

Zoho founder Sridhar Vembu, however, has refused to be cowed down and said he would stick to his commitment and not respond to attacks. "I don't decide my views based on Twitter attacks. If you dislike which events I attend, please do what your conscience dictates and I will do what mine dictates. We earn our daily bread due to our work and we will continue to do quality work. I won't be responding to attacks," he tweeted.

The Accenture chief skipping the event comes amid countrywide protests against the Citizenship Amendment Act. The law for the first time makes religion the test of citizenship in India. The government says it will help minorities from three Muslim-dominated countries to get citizenship if they fled to India because of religious persecution. Critics say it is designed to discriminate against Muslims and violates the secular principles of the constitution.

The RSS said big names such as Ratan Tata, HCL founder Shiv Nadar, Wipro's Aziz Premji and even former President Pranab Mukherjee have been speakers at the organisation's events in the past.

"We condemn those trying to create panic among software professionals. The RSS is a great nationalistic organisation. Those who are trying to confuse or threaten people definitely should be dealt with an iron hand. The Tamil Nadu government I am sure will do," Narayanan Tirupati, BJP spokesperson and an RSS member, told NDTV.