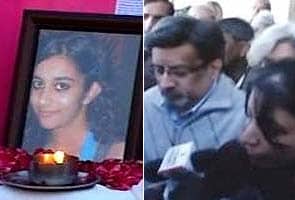 New Delhi: A special CBI court rejected Rajesh Talwar's application seeking annexures submitted by the CBI along with its closure report in Aarushi murder case. It will hold further hearing on January 25.

CBI counsel Saini said nothing beyond the closure report, which has already been given to Rajesh Talwar, should be provided.

The Talwars had on January 11 filed an application seeking all documents submitted by the CBI in support of the closure report.

Talwar's counsel Satish Tamta objected to his client be called an accused.

"What we want is documents like CFSL reports so that I can help the court. It is such a big double murder, how can the case be closed. I don't want the case closed. I am asking for the documents in the interest of justice."

He accused the CBI of an uncooperative attitude.

Aarushi was found murdered in her room with her throat slit at her residence on May 16, 2008. The body of Hemraj was found on the terrace the next day.

In its closure report, CBI held Rajesh as the prime suspect but said it had insufficient evidence to file a chargesheet against him. The CBI conclusions were trashed by Rajesh and Nupur.