Aarey Protests Live Updates: Protesters gathered at the spot asking why can't the authorities wait until a petition can be filed in the Supreme Court regarding the matter. Protests continued during the wee hours of Saturday as authorities began cutting down trees at Mumbai's Aarey Colony for a metro car shed, merely hours after the Bombay High Court dismissed all petitions against the move. Protesters gathered at the spot asking why can't the authorities wait until a petition can be filed in the Supreme Court regarding the matter.

Here are the live updates of Mumbai Aarey protest:

Oct 05, 2019 16:45 (IST)
Shiv Sena chief Uddhav Thackeray Supports Green Activists
Shiv Sena chief Uddhav Thackeray, the BJP's key alliance partner in Maharashtra, has supported the green activists. "The upcoming government will be our government, and once our government comes into power once again, we will deal with the murderers of Aarey Forest in the best possible way," news agency ANI quoted him as saying.
Oct 05, 2019 16:13 (IST)
Bombay High Court Rejects Petition
The Bombay High Court has rejected a fresh petition moved by some green activists to stay the cutting of trees in Mumbai's Aarey Colony.
Oct 05, 2019 14:57 (IST)
There's always conflict between development and conservation: Alia Bhatt

There's always been a conflict between development & conservation. Yes, the city needs to build infrastructure to support a growing population. But the city also needs trees & parks & greenery. We need to protect nature like life depends on it. Because it does.#LetMumbaiBreathe

Union Minister of Environment Prakash Javadekar on #AareyForest: Bombay HC has ruled that it's not a forest. When the first Delhi metro station was to be constructed, 20-25 trees were to be cut, people had protested then too, but for each tree cut, five trees were planted. pic.twitter.com/pCAUuBFmAb

The use of a large number of police personnel. Hacking trees in the dead of the night, even after winning in court (then why not broad day light) and detention of peaceful protesters and citizens. Who is authorising this? During Code of Conduct? All these powers handed to MMRC? https://t.co/SGv5yySfXn

All this for a carshed - which is basically like a parking lot for the Metro. Stealing oxygen from the lungs of citizens. https://t.co/lNf1EHXDJa

I have been forcibly evicted by the cops and I wasn't even breaking the law! The cops in the car wont even tell me where I am being taken ... this is insane @MumbaiPolice

In the cover of darkness the axe falls on our trees . RIP #AareyForest ... we failed you . My heart breaks to know that by morning many proud erect trees will have fallen to human greed . pic.twitter.com/VJdnRl7o6c 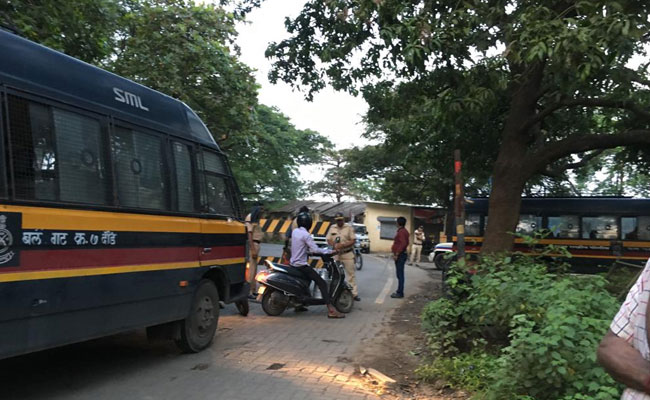 A sad day today where so called development wins over quality of life and preservation of environment. The trees are already being chopped down in the dark of the night. This is murder of mother nature and we will all have to pay for it. God help Mumbai https://t.co/BZvnfbwNYW

Lathi Charge done for the first time at the peaceful protests for Aarey. People have been detained inside, gates have been closed and the authorities are abusing the protestors. Women have been pushed and detained by the police at this hour, which is lawfully wrong. #SaveAarey

At a time when effects of climate crisis are so chillingly visible, Maha Govt's insistence on felling Aarey trees & its refusal to look for other spaces for building metro parking shed is quite worrying. This myopia towards the future of Earth will come to haunt us@Youth4Swarajpic.twitter.com/pmqXU3Ywtc

There is supposed to be a 15 day waiting period after permission is granted and notice has been uploaded on official website. But there is no waiting here. Our trees are being cut as citizens desperately plead to STOP this! @moefcc@PrakashJavdekar#Aareyhttps://t.co/nmVP7WllI7

Isn't this illegal!?! This is happening at #Aarey right now. Why? How? @AUThackeray@mybmc@CMOMaharashtra@TOIIndiaNews@MumbaiMirror@fayedsouza@VishalDadlani@ShraddhaKapoorpic.twitter.com/V8IrO6M2dU

A project that should be executed with pride, the Metro 3, @MumbaiMetro3 has to do it in the cover of the night, with shame, slyness and heavy cop cover.
The project supposed to get Mumbai clean air, is hacking down a forest with a leopard, rusty spotted cat and more

The @ShivSena 's @sheetalmhatre1 ji & Shubha Raul ji at Aarey. Even @prabhu_suneel ji has been standing up for it with the citizens. Wonder why @MumbaiMetro3 is treating Mumbaikars like criminals and not listening to sensible demand of sustainable development. https://t.co/ZdjF8ttKTk

The urgency shown by the authorities to cut the trees at #Aarey is in clear violation of citizens' rights and demands.@Dev_Fadnavis govt. can't take refuge of the night's dark hours to hide its Anti-Mumbai actions.#SaveAareyhttps://t.co/tcmbGTLr3V