Delhi Chief Minister Arvind Kejriwal thanked the people for the massive Punjab mandate and stressed how the common man can make a difference. 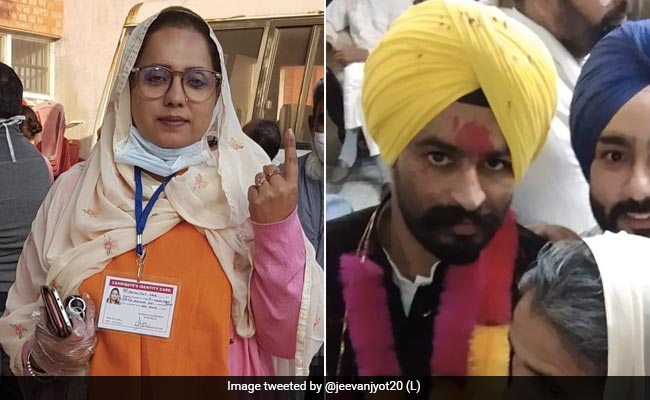 "It's the victory of the people of Punjab. My ticket was announced around December 3. I got positive indication during door-to-door campaigns that Punjab has overcome identity politics," Ms Kaur was quoted as saying by news agency ANI.

The other shocker came from Bhadaur when the AAP's Labh Singh Ugoke posted an emphatic win, defeating incumbent Chief Minister Charanjit Singh Channi with a margin of about 40,000 votes.

AAP leader and Delhi Chief Minister Arvind Kejriwal mentioned Ms Kaur and Mr Ugoke as he thanked the people for the massive Punjab mandate, stressing how the common man can make a difference.

"Do you know who has defeated Navjot Singh Sidhu? We have an ordinary volunteer, Jeevan Jyot Kaur. She has defeated Majithia and Sidhu. So friends, the Common Man is very powerful. I repeatedly say, do not challenge this Common Man, the day he stands up, big revolutions will come, big chairs will be shaken. I appeal to people across the country today, know your power, stand up, 75 years have been wasted, no more," Mr Kejriwal said.

The AAP posted a spectacular victory in Punjab today. As per the Election Commission data, the party has won 45 seats out of the 117 and is leading in 47. Senior party leader Raghav Chadha, who ran the Punjab campaign for his party, has said AAP is now "the natural and national replacement of the Congress".