"Not only are the allegations (against Mahatma Gandhi) vulgar and obscene but are to the extent of imputing incest," the court said. 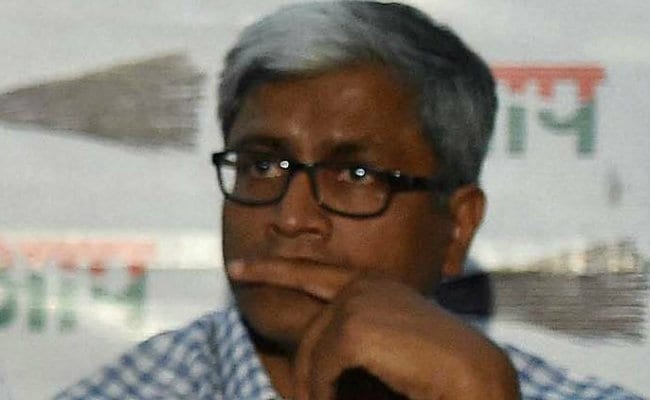 Ashutosh's remarks could not be covered under freedom of speech, court said. (File)

The court's direction came on a complaint seeking a police complaint against Ashutosh for writing a blog with serious allegations against the former leaders to defend an ex-AAP MLA, whose name had cropped up in a sex scandal.

"Easy for attention seeker to stand and point finger towards Mahatma, difficult even for patriotic preacher to rise and achieve greatness like Mahatma," Additional Chief Metropolitan Magistrate Ekta Gauba observed.

The magistrate said that journalist-turned-politician Ashutosh was trying to gain public attention by demeaning the image of Mahatma Gandhi and corrupting the mind of the youngsters.

"Ashutosh Kumar has tried to gain public attention by tarnishing the revered image of Mahatma Gandhiji thereby demeaning his respect in the minds of the people to settle the political scores and made allegations, which tend to corrupt the mind of the readers including the younger generation, which in my view are cognisable offences.

"Thus, I found that in the present case, prima facie there are sufficient grounds for the registration of FIR in the cognisable offences under sections 292 and 293 of the IPC. Hence, SHO, Begumpur is directed to register an FIR against respondent Ashutosh Kumar and to investigate the matter under the relevant provisions of law," the court said.

Ashutosh tweeted his response saying, he respects the court and will reply. "I am an ardent follower of Gandhi ji, can't imagine insulting him."

There is a court order to file FIR ag me. I respect court, will reply in court. But Those who had gone to court after almost 2 years want to gag me/snatch my fundamental RT to freedom of expression. I am an ardent follower of Gandhiji, can’t imagine insulting him.

The complaint lodged by one Yogender has sought an FIR against him under sections 292 (writing or drawing figure shall be deemed to be obscene if it is lascivious or appeals to the pruri ent interest or if its effect tend to deprave and corrupt persons, who are likely to read, see or hear the matter) and 293 (selling, distribution or circulation of obscene object to person under twenty years of age) of the IPC.

In 2016, Ashutosh in a blog had defended a sacked AAP minister who was expelled from the party on charges of rape.

Ashutosh had referred to the reported relationships of Mahatma Gandhi and Jawaharlal Nehru with women to defend Sandeep Kumar over an "objectionable" CD showing him in a compromising position with a woman.

The court, while allowing the complaint, said, "Ashutosh Kumar has made specific and heinous imputations against Mahatma Gandhi. Not only are the allegations vulgar and obscene but are to the extent of imputing incest."

It said the most heinous imputation of incest would "not only injure the reputation of the great man" but would also tend to corrupt the minds of the people, besides degrading the moral standards of all readers of the said article.

It further said that the act of the AAP leader cannot be covered under freedom of speech and expression.

Promoted
Listen to the latest songs, only on JioSaavn.com
The court also said the complainant has the locus standi to seek an FIR as Mahatma Gandhi is the Father of the Nation and anyone from India can lodge a complaint in such a matter.

"Thus, any citizen, living anywhere in India from Kashmir to Kanyakumari and from Ahmedabad to Kolkata, can file a complaint case. So the complainant being a citizen of India has the locus standi to file the present complaint," the court said.