In his latest attack on the AAP leadership, Mr Khaira accused Mr Kejriwal of "putting Haryana before Punjab" on the Sutlej-Yamuna link canal issue. 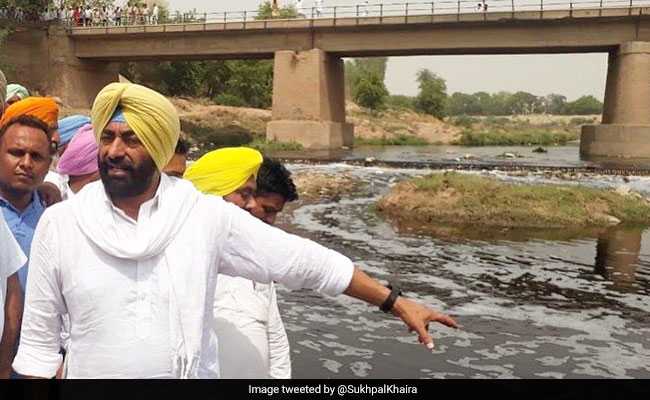 In a statement, the party's Punjab core committee said that it took this decision after "exhausting all the available avenues to assuage them and make them see reason". The party said that "indiscipline and anti-party activities cannot be tolerated at any level and the leaders and volunteers have to follow the rules set by the party".

Mr Khaira, a former leader of opposition of Punjab, has been criticising AAP convener and Delhi Chief Minister Arvind Kejriwal ever since the latter apologised to Shiromani Akali Dal leader Bikram Majithia for calling him a "drug lord" in the run-up to last year's assembly elections in Punjab. After Mr Kejriwal's apology in March this year, Mr Khaira had said that the AAP convener had shown "psychological weakness".

In July, the AAP leadership removed Mr Khaira as the leader of the opposition in the Punjab assembly and replaced him with Dirba legislator Harpal Singh Cheema. A few days after being removed, Mr Khaira declared the Punjab AAP unit's "autonomy" from its central leadership and announced a volunteers' convention, which was attended by eight out of 20 AAP legislators in Punjab besides a large number of party workers.

In his latest attack on the AAP leadership, Mr Khaira accused Mr Kejriwal of "putting Haryana before Punjab" on the Sutlej-Yamuna link canal issue.

"@ArvindKejriwal 's statement today that he wants equal share of Syl water for Haryana and will abide by Supreme Court's decision on water sharing,this only vindicates our demand for autonomy as we can never compromise the interests of Pb (Punjab) while for him Hry (Haryana) is more important (sic)," the lawmaker from Bholath in Kapurthala district tweeted on Thursday.

A day later, he accused the Delhi chief minister of unfairly blaming Punjab farmers for the air pollution in Delhi while absolving Haryana.

"Mr Kejriwal while citing 1st Nov as Hry day forgot it was Pb day as well,we have been robbed of our waters,our capital of Chandigarh,our Pbi speaking areas etc but there was no mention! On the contrary Pb farmers were blamed for pollution!Is it only bcoz he needs votes in Hry (sic)?" he tweeted.

He had also recently accused the party leadership of "unilaterally" announcing candidates for five out of 13 seats in Punjab for the 2019 Lok Sabha elections.

Besides Mr Khaira, AAP has also suspended journalist-turned-politician Kanwar Sandhu, the legislator from Kharar in Sahibzada Ajit Singh Nagar district. It remains to be seen if other lawmakers who joined hands with Mr Khaira and Mr Sandhu will also be suspended.

AAP in Punjab has constantly witnessed a tussle between state leaders and the central leadership. In the past, the party has taken action against several of its prominent leaders from Punjab such as members of parliament Dr Dharamvira Gandhi and Harinder Singh Khalsa and former state unit chief Sucha Singh Chhotepur. Gurpeet Singh "Ghuggi" Warraich, who replaced Mr Chhotepur, also quit the party after the assembly elections.