"...my endeavour has been to empower the poor, the common people and women," PM Modi says in the letter.

"I have experienced poverty very closely in my life ...The best way to uplift the poor is by empowering them. For this reason, ever since people elected me as PM and gave me the opportunity to serve them, my endeavour has been to empower the poor, the common people and women. We have taken many steps from building houses to income generation, from education to health...," says a message from PM Modi in the local language. 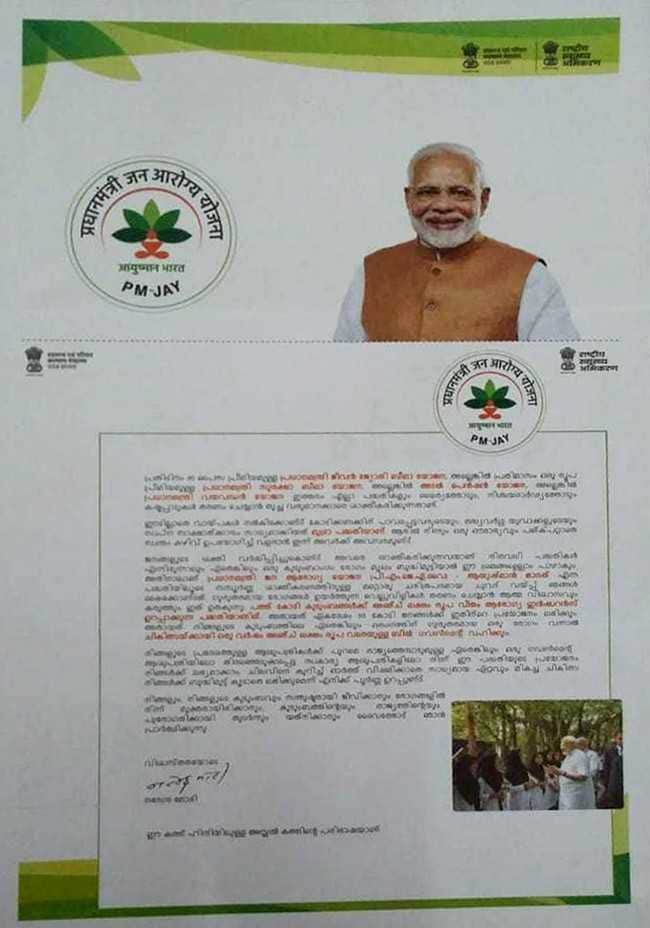 The CEO of Ayushman Bharat, Indu Bhushan, told NDTV that the letters were billed as administrative expenditure and the budget allocated for patients under the scheme were not affected at all.

But the Left alleges that the Prime Minister's letter, mailed directly to citizens just before the national election due by May, is brazen poll propaganda. "The Prime Minister is talking about every possible central government scheme in a letter meant to address health insurance beneficiaries. Each letter is being sent as speed post from the post office to the recipient's home, which can cost upto Rs 40 for each envelope. The budget for this health insurance is just around Rs 2,000 crores. Where is this money coming from," CPM parliamentarian MB Rajesh said.

Indu Bhushan denied the charge. "These are not election gimmicks. In fact it is because of these letters that most people in various states are now aware of the benefits of this scheme and we have had people who came in for treatment only after they received the letters," the Ayushman Bharat CEO said.

It is these letters that provoked West Bengal Chief Minister Mamata Banarjee into pulling out of Ayushman Bharat earlier this month. In West Bengal too, letters written and signed in Bengali by PM Modi talk about his personal struggle with poverty.

The Bengal Health Department's note to the central government made its objections clear. "To our surprise, the entitlement letter/card issued by your ministry mentions the name of the scheme as PMJAY, which is not only a violation of the stipulation of the said MoU, but has created unnecessary confusion at the state level.... Under the above mentioned situation, this is to inform you that the Government of West Bengal is withdrawing from Ayushman Bharat-Swasthyasathi scheme with immediate effect," Bengal said in its letter to the Union Health Secretary.

The ruling BJP defended the mega outreach just before polls. "The government is doing this as an outreach programme and taking the government to the people. And if someone feels that this is political, it's because they must have misused money when they were in power. The taxpayer's money is being used so that more people come to know about it, so more people can benefit," said BJP parliamentarian V Muraleedharan.

He said funds for schemes were mostly underutilised because people were "not aware" of them. "So the government of India has to have these awareness drives," said the BJP lawmaker.

Many non-BJP states are upset about these letters being sent to beneficiaries without the state government's consent.

An official in Kerala told NDTV: "The orders are very clear - not one letter should be undelivered or returned and the delivery process should start the day the letters reach. We received the first batch on Sunday and started working on it that day itself."

Among the recipients in state capital Thiruvananthapuram is Vishnu, in his 20s. He says a letter arrived at his home on Wednesday, with the names of all the beneficiaries in the family. "It gives details of whatever the prime minister has done for people in last few years," Vishnu says.