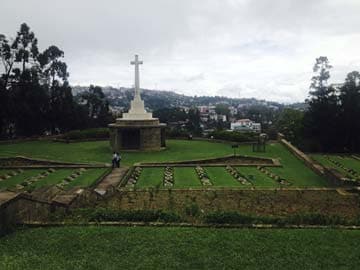 A military cemetery and memorial overlooks Kohima, in India's remote northeast, where one of the bloodiest battles of World War II's Asian theater was fought

Kohima, India: Soldiers died by the dozens, by the hundreds and then by the thousands in a battle here 70 years ago. Two bloody weeks of fighting came down to just a few yards across an asphalt tennis court.

Night after night, Japanese troops charged across the court's white lines, only to be killed by almost continuous firing from British and Indian machine guns. The Battle of Kohima and Imphal was the bloodiest of World War II in India, and it cost Japan much of its best army in Burma.

But the battle has been largely forgotten in India as an emblem of its colonial past. The Indian troops who fought and died here were subjects of the British Empire. In this remote, northeastern corner of India, more recent battles with a mix of local insurgencies among tribal groups that have long sought autonomy have made remembrances of former glories a luxury.

Now, as India loosens its security grip on this region and a fragile peace blossoms among the many combatants here, historians are hoping that this year's anniversary reminds the world of one of the most extraordinary fights of the Second World War. The battle was voted last year as the winner of a contest by Britain's National Army Museum, beating out Waterloo and D-Day as Britain's greatest battle, although it was overshadowed at the time by the Normandy landings.

"The Japanese regard the battle of Imphal to be their greatest defeat ever," said Robert Lyman, author of "Japan's Last Bid for Victory: The Invasion of India 1944." "And it gave Indian soldiers a belief in their own martial ability and showed that they could fight as well or better than anyone else."

The battlefields in what are now the Indian states of Nagaland and Manipur, some just a few miles from the border with Myanmar, or what was then Burma, are also well preserved because of the region's longtime isolation. Trenches, bunkers and airfields remain as they were left 70 years ago - worn by time and monsoons but clearly visible in the jungle.

This mountain city also boasts a graceful, terraced military cemetery on which the lines of the old tennis court are demarcated in white stone.

A closing ceremony for a three-month commemoration is planned for June 28 in Imphal, and representatives from the United States, Australia, Japan, India and other nations have all promised to attend.

"The Battle of Imphal and Kohima is not forgotten by the Japanese," said Yasuhisa Kawamura, deputy chief of mission at the Japanese Embassy in New Delhi, who is planning to attend the ceremony. "Military historians refer to it as one of the fiercest battles in world history."

A small but growing tour industry has sprung up around the battlefields over the past year, led by a Hemant Katoch, a local history buff.

But whether India will ever truly celebrate the Battle of Kohima and Imphal is unclear. India's founding fathers were divided on whether to support the British during World War II, and India's governments have generally had uneasy relationships even with the nation's own military. So far, only local officials and a former top Indian general have agreed to participate in this week's closing ceremony.

"India has fought six wars since independence, and we don't have a memorial for a single one," said Mohan Guruswamy, a fellow at the Observer Research Foundation, a public policy organization in India. "And at Imphal, Indian troops died, but they were fighting for a colonial government."

Rana T.S. Chhina, secretary of the Center for Armed Forces Historical Research in New Delhi, said that top Indian officials were participating this year in some of the 100-year commemorations of crucial battles of World War I.

"I suppose we may need to let Imphal and Kohima simmer for a few more decades before we embrace it fully," he said. "But there's hope."

Ningthoukhangjam Moirangningthou, 83, still lives in a house at the foot of a hill that became the site of one of the fiercest battles near Imphal. Ningthoukhangjam watched as three British tanks slowly destroyed every bunker constructed by the Japanese.

"We called them 'iron elephants,'" he said of the tanks. "We'd never seen anything like that before."

Andrew S. Arthur was away at a Christian high school when the battle started. By the time he made his way home to the village of Shangshak, where one of the first battles was fought, it had been destroyed and his family was living in the jungle, he said.

He recalled encountering a wounded Japanese soldier who could barely stand. Arthur said he took the soldier to the British, who treated him.

Promoted
Listen to the latest songs, only on JioSaavn.com
"Most of my life, nobody ever spoke about the war," he said. "It's good that people are finally talking about it again."