A Killing Tests India's Protection Of An Aboriginal Culture 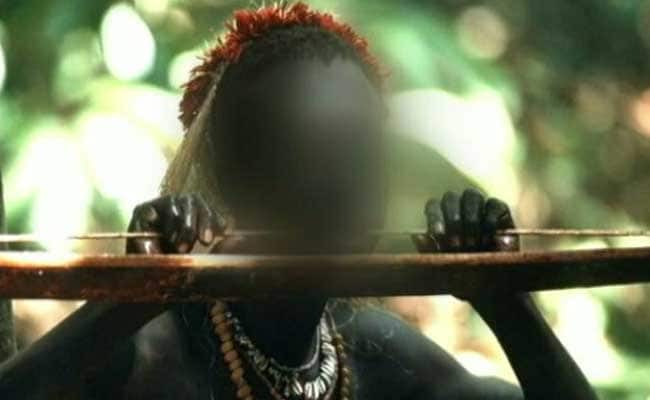 The policy is to send the Jarawas back into the 300 square miles of forest that has been set aside for the tribe. (File Photo)

Ograbraj: The police on South Andaman Island know what to do when members of the isolated Jarawa tribe venture into the villages that surround them, hoping to snatch rice and other prized goods, like cookies, bananas or, for some reason, red garments.

The policy is to send the Jarawas back into the 300 square miles of forest that has been set aside for the tribe, where they are expected to survive by hunting and gathering, as they have for millenniums. Inspector Rizwan Hassan, whose precinct includes a "buffer zone" beside the tribe's reserve, is under clear orders: to interfere as little as possible in the traditional life of the tribe, which India prizes as the last remnant of a Paleolithic-era civilization.

This did not prepare him for the criminal complaint that was registered at his station in November. A 5-month-old baby was dead, and witnesses came forward willingly, leaving the police, for the first time in history, confronting the prospect of arresting a Jarawa on suspicion of murder.

The Jarawas, whom one geneticist described as "arguably the most enigmatic people on our planet," are believed to have migrated from Africa around 50,000 years ago. They are very dark-skinned, small in stature and until 1998 lived in complete cultural isolation, shooting outsiders with steel-tipped arrows if they came too near.

After the tribe made peace with its neighbors, India took steps to minimize contact between the Jarawas and the world that surrounds them, hoping to avoid the catastrophes that befell aboriginal people in other countries, like the United States and Australia, when settlers passed on germs and alcohol.

Nevertheless, contact is occurring. Outreach workers visit the tribe's camps, and Jarawas receive medical treatment in isolation wards at hospitals. Poachers strike up illicit relationships with members of the tribe, trading food for help in harvesting crabs or fish.

It is as a result of such an encounter, the police believe, that a baby boy with a lighter skin color than usual was born to an unmarried Jarawa woman last spring, evidence that alien genes had found their way into an undiluted pool.

Concern for a Baby

Among the first to be alerted about the birth of a mixed-race baby was M. Janagi Savuriyammal, a 24-year-old tribal welfare officer whose office sits beside a crocodile-infested creek at the edge of the tribe's reserve.

It is no secret that the tribe has, in the past, carried out ritual killings of infants born to widows or - much rarer - fathered by outsiders. Dr. Ratan Chandra Kar, a government physician who wrote a memoir about his work with the Jarawas, described a tradition in which newborn babies were breast-fed by each of the tribe's lactating women before being strangled by one of the tribal elders, so as to maintain "the so-called purity and sanctity of the society."

He said he was aware of at least seven such cases in his 12-year tenure. The faces of the children haunted him, he wrote in his book, but he added that he was "never ready to interfere in the customs and rituals of the tribe."

Savuriyammal took a different view. When she learned that some members of the tribe "did not want the baby to grow up," as she put it, she and her staff began a campaign of persuasion, presenting arguments against killing the child and, at one point, posting a social worker near the camp to watch over him.

She was not the only one who felt the child was in danger. Rooby Thomas, who oversees care of Jarawa patients at a hospital near the reserve, saw the baby when his mother brought him in for a checkup and was so alarmed when she saw his skin tone that she set up a screen to hide him.

"I isolated that baby from the other Jarawa," she said. "I heard they usually kill non-Jarawas."

Five months had passed when Savuriyammal received an alarmed call from a member of her agency's field staff. She rushed to the camp to find the baby missing and his mother crying silently.

Two witnesses, both women, told the police that on the previous night they had seen a Jarawa man, Tatehane, drinking liquor with an outsider who had entered the reserve illegally.

Tatehane then slipped into the mother's hut and took the baby from her side before she awoke, a local newspaper reported, citing the two witnesses. The witnesses later found the baby's body on the sand, drowned.

Savuriyammal filed a criminal complaint with the police, but they were in unknown territory: In 200 years of fatal clashes between tribesmen and British and Indian settlers, no member of the tribe had ever been named as a suspect in a crime.

The authorities arrested the two nontribal men identified in the criminal complaint: a 25-year-old believed to have fathered the child, who was accused of rape, and a man who gave Tatehane liquor and was accused of abetting murder and interfering with aboriginal tribes.

But they did not arrest the Jarawa man, Tatehane, even though he was accused of murder, instead appealing for guidance from the department of tribal welfare, said Atul Kumar Thakur, the South Andaman police superintendent, who is overseeing the investigation. Hassan was not authorized to speak about the case.

There were other problems. When Hassan asked a tribal elder to lead him to the child's body, the man said only that he had carried it deep into the jungle, where tribal tradition dictates bodies should be left for months, until dry bones can be retrieved.

When the inspector pressed harder, the elder looked at him in perplexity, saying the baby was no longer in that place, but had joined his ancestors in another place, said Savuriyammal, who was present for the conversation.

When Hassan had persisted, she said, the elder had just shaken his head.

"If I give the body to you, the world will start shaking, and we will all die," the elder said. At that, Savuriyammal said, the inspector ended the interrogation.

Even before the police heard of the baby's killing, the authorities on South Andaman Island were struggling with the question of whether to allow the Jarawas, who are classified as a "particularly vulnerable tribal group," more access to the world outside their reserve.

The top official on the Andaman Islands, Lt. Gov. A. K. Singh, said that upon taking up his post in 2013, he had encountered two schools of thought. One, held by officials and academics on the left, he said, was that "any contact of the primitive tribe with modern civilization has been detrimental."

The other questioned how the government could deny the tribe the benefits of modern life. "Mankind has progressed by leaps and bounds," Singh said. "Are they to remain in that state? Have we given them the choice?"

Singh has introduced programs that gently nudge the Jarawas toward greater social integration: lessons in reading and writing, and the distribution of clothing in exchange for handmade baskets.

The pace of change worries specialists like S. A. Awaradi, the director of the Andaman and Nicobar Tribal Research Institute, who describes the tribe as "our human heritage."

"This has been a self-sufficient civilization for thousands of years," Awaradi said. "By mishandling, you are creating a blunder of civilization."

"Basically," he added, "contact is the mother of all ills."

Zubair Ahmed, a journalist, said the policy of minimizing interaction with the Jarawas had run into a problem: Members of the tribe are curious about what surrounds them.

"We have seen them coming out, coming out on their own," Ahmed said. "You cannot push them back inside the forest. They want to have a phone. They want to ride in a vehicle."

The killing wrenches the issue into painful new territory. Few islanders like the idea of seeing a Jarawa man handcuffed, let alone imprisoned.

Nupur Sarkar, a 28-year-old constable in the village of Tirur, grew up hearing the story of how Jarawa men hiding in the treetops shot her uncle through the chest, then surrounded his fishing boat, puncturing his torso again and again with their arrows.

Now that friendly contact with the tribe has increased, she is quite sure she knows the man who killed her uncle. But she shook her head sharply at the thought of prosecuting a person who is unaware of Indian laws.

"They are in a pre-civilization period," she said cheerfully. "We deal with them on that basis."

Others go further, saying the state has no business interfering in the tribe's tradition of killing children of mixed blood.

"Such things were usually ignored," said Samir Acharya, an activist with the Society for Andaman and Nicobar Ecology. "I think they have the right to maintain the purity of their race. If they decide such a child should be wasted, let them do it."

A Case in Legal Limbo

For now, the case does not seem headed for a swift resolution. Thakur, the police superintendent, who is overseeing the case from the islands' capital, Port Blair, said it was straightforward enough from a constitutional perspective: "Nobody is above the law."

On the other hand, Indian law also accords special rights to vulnerable social groups, like castes and tribes. "They have special status," he said. "We are duty-bound to protect their interests."

The matter, forwarded to the Tribal Welfare Department, seems poised to enter a kind of legal Sargasso Sea, circulating among bureaucratic eddies and tide pools. This is a peculiarly Indian solution, and that seems to suit nearly every stakeholder. There is no pressure from members of the Jarawa tribe, who are, by and large, sympathetic to the man accused of killing the child, Savuriyammal said.

But Rooby Thomas cannot get the boy's face out of her mind.

As a medical officer in the hospital closest to the Jarawa reserve, she spends long strings of idle hours with their families. As Thomas spoke, a cluster of naked Jarawa children were making a racket outside the isolation ward, peering out at the lights of the village and calling to passers-by.

Thomas drew her breath when she learned from a reporter that the boy, whom she had treated as a newborn, had been killed. She wondered if she could have saved his life if she had kept him in the clinic.

That thought had fluttered through her mind at the time, but after a few days the child's mother seemed restless and confined within the hospital's walls, and a male relative who accompanied them was insistent on leaving and broke a window. So Thomas submitted the necessary paperwork, waited for a government vehicle and sent the child back into the forest.
© 2016, The New York Times News Service