The Saras project was resurrected in 2016 after a test plane crashed in 2009. The 7,000-kg plane has made two successful test flights this year

Bengaluru: Starting after nearly a seven-year gap, the development of the first indigenous passenger and transport plane, Saras, is firmly back on track. The 7000-kg aircraft is now being tested by the pilots of the Indian Air Force and has made two successful test flights this year. The 19-seater turboprop aircraft could help fulfil Prime Minister Narendra Modi's dream of helping "people who wear hawai chappals" to take a "hawai jahaz".

Production is expected to start in 2022. Saras is expected to cost Rs. 45 crore -- cheaper than what India currently pays. A comparable Dornier plane costs Rs. 60 crore.

The development of Saras, which began 18 years ago, was stopped in 2009 after it crashed during a test flight and two pilots died. Work started again in 2016 at Bengaluru's National Aerospace Laboratories.

Jitendra J Jadhav, the chief of National Aerospace Laboratories, told NDTV that they have found that the crash was caused by a procedural mistake, not a design or manufacturing glitch. But there were a "lot of design deficiencies, which have been rectified quickly by our team, mainly those handling quality and controllability of the aircraft and digital avionics," he added.

"The Saras we have flown now is in fact better than the earlier prototype. There have been several design improvements which NAL as the designer has incorporated in this aircraft, said Air Vice Marshall Sandeep Singh. 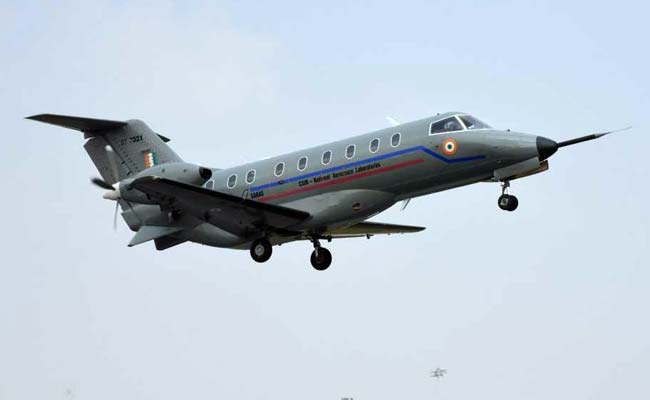 Union Science Minister Harsh Vardhan said the project was dumped by the previous government, even though the Directorate General of Civil Aviation had "exonerated the aircraft from any design flaw or poor-quality production". No effort was made to revive the project, he said.

The Saras Mk 2 will be ideal for a variety of applications -- like aerial search, survey, disaster management, border patrol, coast guard, ambulance and other community services. It would also be useful to establish commuter connectivity as air taxi and executive transport under the Udaan scheme, the minister added.

Hindustan Aeronautics Limited will be the production agency for the military version of Saras, while the production of civil version will be given to a private player, officials of the NAL said. India needs 120-160 aircraft -- civil and military - over the next 10 years.

According to NAL, the aircraft available in the international market are of 1970s technology, such as Beechcraft 19000D, Dornier-228 and Embraer EMB 110. They have higher fuel consumption, lower speed, unpressurised cabin and high operating cost. They are also unsuitable for operations from hot and high-altitude airfields.

Promoted
Listen to the latest songs, only on JioSaavn.com
In comparison, the upgraded Saras Mk2 has considerable drag and weight reduction with unique features like high cruise speed, lower fuel consumption, short landing and take-off distance and low cabin noise. It is also operable from high and hot airfield and the cabin is pressurized, the officials said.

After India began its light transport aircraft project, Russia, China, the US, Indonesia and Poland have launched programmes for development of next generation 19-seater aircraft.
Comments
SarasNational Aerospace Labratories