A big step in India's Rafale jet deal with France 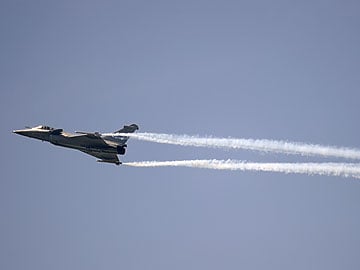 New Delhi: The Indian government and French aerospace major Dassault have sealed a work share agreement in what is being described as a big step forward, almost two years after negotiations began in the deal for 126 Rafale fighter jets to be bought by India.

The government's Hindustan Aeronautics Limited or HAL will do 70 per cent of the work on the 108 planes that will be manufactured in India. Dassault would do the rest of the work, sources said.

The first 18 of the fighters will be fully manufactured in France and will be brought to India in "fly-away" condition.

India has apparently rejected Dassault's reservations about having HAL as the major player.

The final contract, though, is still far from being signed. For one, India's Ministry of Defence has no money in the current financial year that ends this month, for initial payment.

Also, general elections are due by May and the final contract will only be signed by the next government, if it chooses to go ahead on the same terms and conditions.

Dassault Aviation had won the contract to supply 126 Medium, multi-role combat aircraft or MMRCA in 2012. The massive contract is pegged at anywhere between 12 to 15 billion dollars.

Sources said the deal is complex and requires both sides to be in sync on commercial factors, logistics and HAL's ability to assemble the Rafale.

For instance, the radar on the Rafale jet is to be manufactured by Bharat-Electronics Ltd (BEL) in Bangalore. The Radome (the protruding snub nose on the aircraft) would, however, be manufactured by HAL at its Hyderabad facility. Dassault wanted clarity on how the two units would coordinate their activities.

Now, HAL has apparently agreed to set up a new facility close to the one that BEL has in Bangalore.

Promoted
Listen to the latest songs, only on JioSaavn.com
The French and Indian governments are also working on an agreement for a sovereign guarantee that Dassault will supply, service and maintain the Rafales over the next 40 years.

This is an important provision in the Indian defence procurement procedure, designed to ensure that manufacturers don't renege on their commitment.