NEW DELHI: The government has begun a new investigation into Robert Vadra, the son-in-law of Congress chief Sonia Gandhi, to determine if a controversial arms dealer bought a "benami" or proxy-owned mansion in London for him in 2009.

The government investigation is based on two reports by investigating agencies. The reports quote from emails allegedly sent by Robert Vadra and his executive assistant, Manoj Arora. NDTV has accessed the reports but cannot confirm the authenticity of the emails. The reports also include details from the questioning of controversial arms dealer Sanjay Bhandari.

The emails were sent to Sumit Chadda, a relative of Sanjay Bhandari's based in London.

One report says, "There was an email dated 4.04.2010 in which Sumit Chadda reported the progress of work of renovation and repair work to Robert Vadra and asked for reimbursement of expenses."

The report then quotes Robert Vadra replying to Sumit Chadda saying "He would look into the issue" and added that his "secretary" Manoj will be "in touch". Thereafter, the report says, "Subsequently Mr Manoj kept in touch with Sumit Chadda using an email ID 'Exim Real Estate'".

Government officers who spoke to NDTV on the condition of anonymity say the emails exchanged also refer to redecorating the property, including its chandeliers.

One of the reports says "Sanjay Bhandari was specifically questioned whether Robert Vadra was the beneficiary of the sale of the Bryanston Square property in London. He did not deny the same but avoided a direct answer by stating that he would he able to confirm it by referring it to sale deed kept with his lawyer in London." 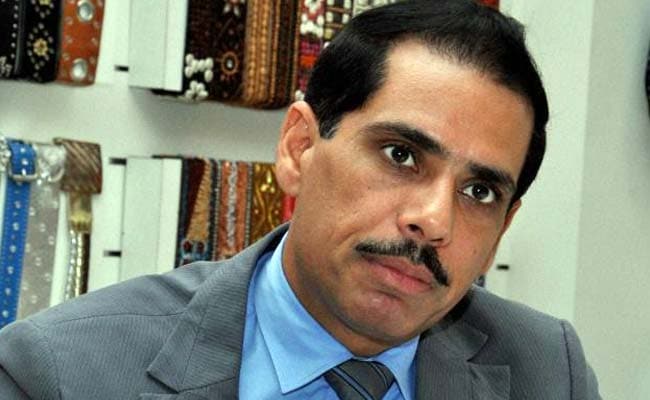 Robert Vadra's lawyers have said he "does not own directly or indirectly, any house described by you as No 12, Ellerton House, Bryanston Square, London" and that Robert Vadra and his assistant "have not entered into any transaction of a financial nature with Mr Sanjay Bhandari and are not even aware that Mr Sanjay Bhandari is involved in any defense transaction."

"It is shocking but not surprising," said BJP parliamentarian Kirit Somaiya to NDTV. "I would approach the Enforcement Directorate, Income Tax, and request them to check the property and any non-transparency in the transaction."

Sanjay Bhandari is the owner of Offset India Solutions (OIS). A covert Intelligence Bureau report had red-flagged his business dealings in 2014 right after the Modi government took office and advised the Defence Ministry to keep him at a distance.

Sanjay Bhandari, government officers say, tried to destroy his BlackBerry phone during the raids. However, they were able to recover data from his handset and his computers. Sanjay Bhandari's public relations office asked NDTV for a detailed questionnaire which was sent to them, but they have yet to respond.

Sanjay Bhandari formed OIS in 2008 with a paid-up capital of only one lakh rupees. Its rapid escalation into a multi-crore venture caught the attention of financial crime investigators. He is now being investigated for financial violations linked to 35 suspected shell companies between 2009 and 2014. Recently, OIS won a deal to supply parts for 38 combat aircraft that India is buying from Dassault Aviation.

Robert Vadra is being investigated for land deals in Haryana while the Congress ‎governed the state to determine if he got special discounts and other benefits that allowed him windfall gain. He has denied any wrongdoing.