Rajnath Singh said approximately 6,000 terror incidents had taken place in Jammu and Kashmir in 1995 and the number has come down to about 360 in 2017. 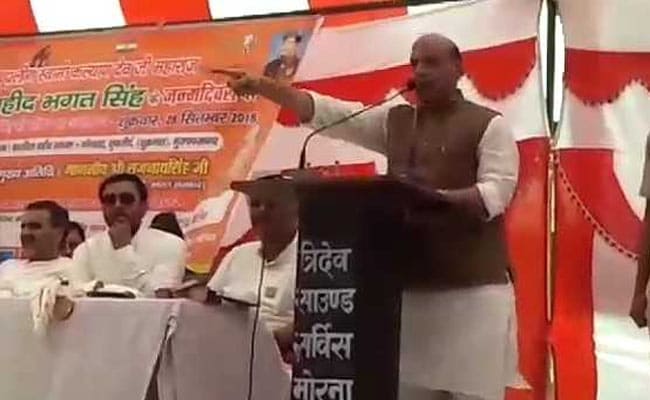 Blaming Pakistan for the unrest in Jammu and Kashmir, Home Minister Rajnath Singh said today that 90 per cent people in the state would like to participate the panchayat and urban local body polls scheduled this month.

The home minister, however, acknowledged that there were difficulties in bringing back underworld gangster and 1993 Mumbai serial blasts mastermind Dawood Ibrahim, currently hiding in Pakistan.

Mr Singh said approximately 6,000 terror incidents had taken place in Jammu and Kashmir in 1995 and the number has come down to about 360 in 2017.

"I do agree that the situation in Jammu and Kashmir should improve. But, the problem that we face is mostly because of Pakistan."

"We have always tried to improve relations with Pakistan. But the country will not mend its ways. It continues to sponsor terrorism in Jammu and Kashmir," he said speaking at the HT Leadership Summit.

Referring to the forthcoming elections to the panchayat and urban local bodies in Jammu and Kashmir, the home minister said 90 per cent people of the state would like to get involve in the poll process, which the current government has started after a long break.

When asked about the several BJP candidates getting elected to the local bodies unopposed, Mr Singh said in the recently held panchayat elections in West Bengal, 43 per cent candidates won uncontested and such things are not uncommon.

Talking about the now-snapped BJP-PDP alliance, he said both the parties had joined hands, honouring the mandate of the last state assembly elections, but the "experiment did not succeed".

Mr Singh said naxalism was the biggest challenge the nation was facing till a few years ago, but the menace has been contained to a great extent now.

"Naxalism was spread in 126 districts and it has come down to just 50-52 districts now, and among them the worst hit is just 10 to 12 districts," he said.

Asked about the arrest of some alleged Naxal sympathisers and terming them as "urban Naxals", Mr Singh said there are people who are trying to incite violence or support violence using Maoism and the government would allow them to do so.

On Congress President Rahul Gandhi's allegation that the BJP has taken over some institutions, Mr Singh said the "allegation is baseless".

"He (Rahul Gandhi) should have given at least one example where this has happened. We have always maintained the dignity of every institution in the country," he said.

On incidents of mob killings, the home minister said even though the law and order is a state subject, the central government has issued a number of advisories to the states asking them to take action.

Commenting on the recent agitation by farmers, Mr Singh said the government has given some promise to the protesting farmers and those will be fulfilled.

"I have invited the protesting farmers and had discussions with them for two-three hours. We have been in touch with the farmers. I spoke to them when they were agitating. We are still in touch with them and are arriving at a consensus on many matters," he said.