As many as 28 civilians have been killed in terrorist violence in Kashmir this year, seven of them in the past six days. 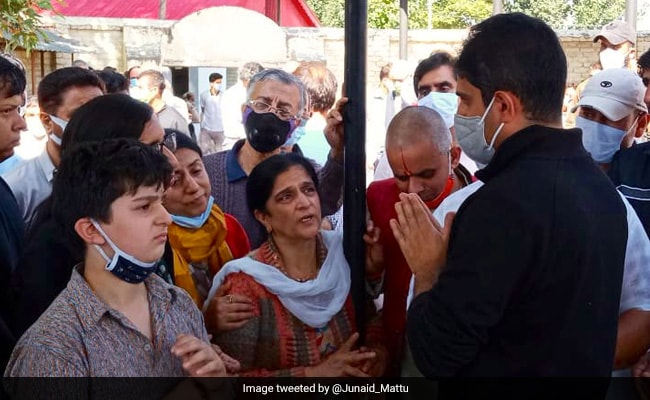 Targets for the recent civilian killings in Kashmir were "segregated" on the basis of the community they belonged to and while such killings do not require big weapons and trained terrorists, their impact is huge, sources in the security establishment have told NDTV.

As many as 28 civilians have been killed in terrorist violence in Kashmir this year, seven of them in the past six days.

"All killings were pistol killings which means targets have been identified and segregated," a senior officer in Jammu Kashmir told NDTV.

The officer said Deepak Chand and Supunder Kour, the two two teachers killed in Srinagar today, were segregated on the basis of community.

The officer said there had been inputs that "pro-government voices" and government officials would be targeted. Officials said they are collecting information on whether those killed over the past week were beneficiaries of the recent welfare schemes announced by the centre.

Officials also said that the recently launched online portal for time-bound redressal of grievances of Kashmiri migrants has received good response and that has frustrated terrorists.

"Pakistan is emboldened after what happened in Kabul and for these killings they do not need big weapons and trained militants but the impact of these killings is huge," said a senior officer in the security grid of the Union Territory.

Meanwhile, Union Home Minister Amit Shah chaired a meeting in North Block today in which he directed agencies operating in Jammu and Kashmir to tighten the security grid so that civilians, especially the minority community, does not feel threatened.

Local police have been asked to ensure the safety of minorities. Some of them were also moved to security camps after terror group The Resistance Front, which has claimed responsibility for the killing of pharmacy owner Makhan Lal Bindroo in Srinagar, said they would carry out more such attacks against those found to be involved in "anti-Kashmir" activities.

As per the Home Ministry data, a total of 28 civilians have been killed by terrorists so far this year. Out of them, five persons belonged to the local Hindu or Sikh communities and two were Hindu migrant labourers.

Inspector General, Jammu and Kashmir, Vijay Kumar said terrorists' handlers are frustrated after a huge number of terrorists, including those part of their leadership, were gunned down by security forces. Out of the frustration, they had now started targeting unarmed policemen, innocent civilians and politicians, he said.

"These acts are committed by newly recruited terrorists or those who are about to join terrorist ranks. In some cases, overground workers have been found to be directly involved. Police are working hard and we are identifying all such part-time /hybrid terrorists and strictest action shall be taken against them. We have also been launching operations along with other security forces," said Inspector General Vijay Kumar. "We appeal to the general public, especially minority communities, not to panic," he added.

A retired Intelligence Bureau official who has worked in Jammu and Kashmir for over a decade said the government's "aggressive narrative" on various issues has hurt local sentiment. "There are many contributing factors, leading to the increase in violence in the area," he said, adding that in each civilian killing, " there is a message for the government".