The Minister was in Madurai to pay respects to rifleman D Lakshmanan, who was killed in the line of duty in an encounter with terrorists in Rajouri district of Jammu and Kashmir. 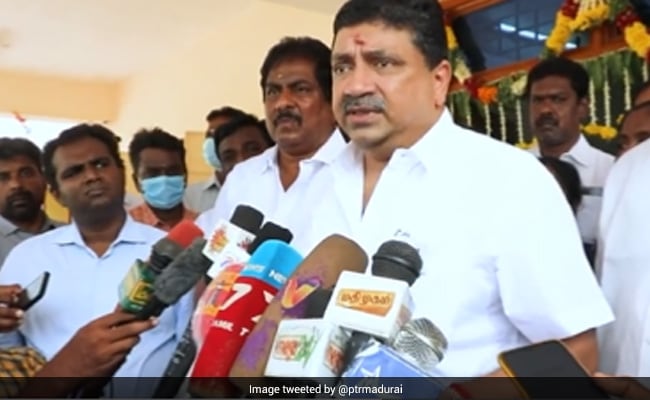 Palanivel Thiaga Rajan is a strong voice of the ruling DMK

Five BJP workers have been arrested after a slipper was thrown at Tamil Nadu Finance Minister Palanivel Thiaga Rajan's car in Madurai.

The Minister was in Madurai to pay respects to rifleman D Lakshmanan, who was killed in the line of duty in an encounter with terrorists in Rajouri district of Jammu and Kashmir.

Pressed to answer what was the trigger for the incident, the officer said, "I do not want to say anything now. Only after investigation we can share information".

The BJP workers, who had gathered to receive the party's state president K Annamalai, had reportedly raised slogans against the Minister.

A DMK official, NDTV spoke to, says the place meant for paying tributes was packed with party workers from the BJP. BJP state president K Annamalai too wanted to pay respects. The Minister pointed out that this would be a violation of protocol as only designated members, including the Collector, ought to be part of this.

As police attempted to regulate the crowd, word spread that the Minister wanted the party workers to be moved.

A video shared by the DMK, which NDTV cannot independently verify, shows a woman bending to remove her slipper and thowing it at the Minister's car. The slipper landed on the windshield, close to the national flag mounted on the car.

Later, Mr Annamalai was allowed to pay his respects.

"Annamalai broke military protocols for a photo opportunity. Last respects are only done by regiment. Annamalai wanted a photo op with the body. He has posted this picture at the service. He should have paid respects in the house/village, not at the military service," a DMK office bearer said.

Dr Palanivel Thiaga Rajan, a strong voice of the ruling DMK, had also recently taken on Union Finance Minister Nirmala Sitaraman on her claims that states had accepted levy of GST on branded food products, in the GST council meet.