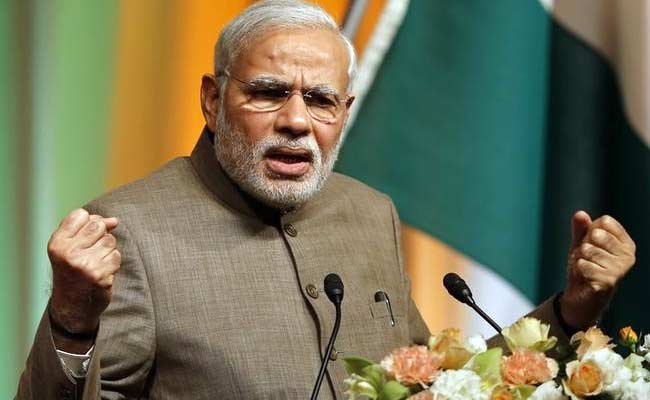 PM Modi gives speech during a lecture in Tokyo on September 2. (Reuters)

Congress spokesperson Shakeel Ahmed, who invoked the shrinking chest size, said, "It is unfortunate that civilians are being killed. But our Prime Minister is neither tweeting about it nor mentioning it in his election speeches now. Why is he silent?"

In the campaign for the national election, which he swept, the PM had said leaders with 56-inch chests are needed to guide India.

This week has seen among the gravest violations of a 2003 ceasefire between India and Pakistan. Five civilians were killed on Monday night and nearly 30 injured in the Jammu and Poonch sectors. Seven more civilians were injured on Tuesday night, said Indian officials as the firing continued. Pakistan forces also fired at 40 Indian army posts early on Tuesday, said officials. Indian forces retaliated with gunfire and mortar bombs, they added.

India has accused Pakistan of using this week's violence to create a distraction to help separatist militants infiltrate into Kashmir. Pakistan has repeatedly denied this, but Indian army sources tell NDTV they believe nearly 700 militants are waiting to cross into the Kashmir Valley from across the border.

In the last two days, officials have helped more than 20,000 residents of Arnia -which was targeted by Pakistan on Monday night - and thousands from other villages to evacuate their homes.

A Pakistani military statement said four civilians, including two children, were killed on its side by Indian firing on Monday night.

Promoted
Listen to the latest songs, only on JioSaavn.com
Yesterday, Defence Minister Arun Jaitley warned, "Let everybody be assured that our armed forces and para-military forces are fully ready and they are responding to each of these provocations from Pakistan."