West Bengal Lok Sabha Elections 2019: As many as 10 parliamentarians have been dropped by the Trinamool Congress.

West Bengal Chief Minister Mamata Banerjee on Tuesday announced the list of Trinamool Congress candidates for all the 42 Lok Sabha seats in the state, dropping 10 current parliamentarians. Allotting 41 per cent of the tickets to women, the list included a number of Bengali celebrities like Mimi Chakraborty and Nusrat Jahan.

Among those not in the list are Harvard University professor and eminent historian Sugato Bose - who had earned praise for his speeches during his first stint in parliament. Ms Banerjee said he had opted out of the contest as "he did not get permission from his university".

In place of Dr Bose, the Trinamool pitched a surprise with the Jadavpur constituency ticket - leading Bengali actress Mimi Chakraborty. Another popular actress Nusrat Jahan has been made the candidate from Basirhat instead of current parliamentarian Idrish Ali.

Bengali actor Dipak Adhikari, or Dev as he is known, would seek re-election from Ghatal Constituency. 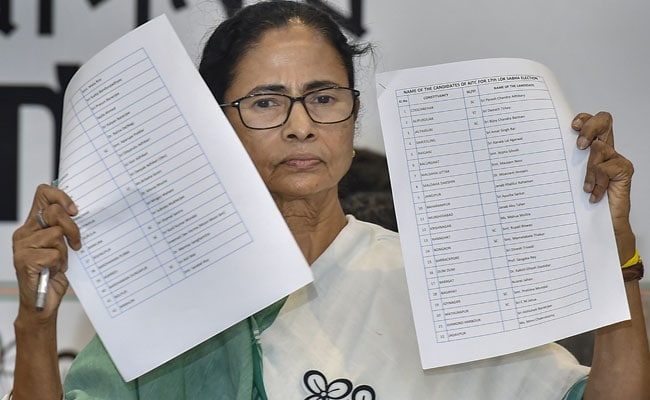 Actress Satabdi Roy will fight to retain her seat Birbhum, while former actress Moon Moon Sen, who pulled up an unexpected victory over CPI-M veteran Basudeb Acharya in Bankura in 2014, has been shifted to Asansol, where she is likely to take on BJP candidate and singer-turned-Union Minister Babul Supriyo.

West Bengal votes in all the seven phases in this year's nation polls starting on April 11. Results will be declared on May 23. The Trinamool Congress and the BJP are headed for a bitter contest in the polls with the Congress and the Left expected to fight together.

At the news conference, Mamata Banerjee attacked the BJP and Prime Minister Narendra Modi's government, claiming she had information that "VVIPs" were using helicopters and chartered flights to transport money to bribe voters.

The Trinamool Congress chief slammed the central government over a host of issues including the Rafale deal, farm distress and unemployment.

Ms Banerjee said the outgoing Trinamool Congress lawmakers whose names do not figure in the list will be drafted for party work.

The Trinamool Congress, she said, will also contest some seats in Odisha, Assam, Jharkhand, Bihar and the Andaman and Nicobar Islands.