Justice SK Shinde granted bail to Neeraj Desai and three other former employees of the Brihanmumbai Municipal Corporation on a surety of Rs 50,000 each. 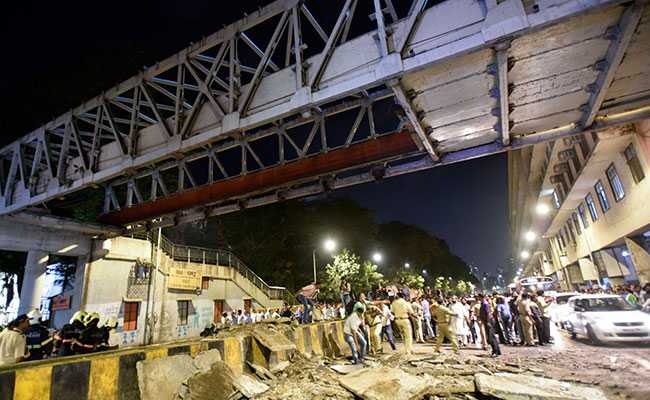 The bridge near Chhatrapati Shivaji Terminus in Mumbai collapsed in March, 2019

The Bombay High Court on Wednesday granted bail to structural auditor Neeraj Desai and three former officials of the Mumbai civic body, arrested in connection with the collapse of a foot-over bridge at the Chhatrapati Shivaji Maharaj Terminus (CSMT) in March this year.

Justice SK Shinde granted bail to Neeraj Desai and three others - Sandip Kakulte, Anil Patil and Shitala Prasad Kori (former employees of the Brihanmumbai Municipal Corporation) - on a surety of Rs 50,000 each.

The former civic body officials, who were working in the department that deals with bridges, were accused of dereliction of duty and failing to oversee the structural audit work carried out by Mr Desai's firm on the foot-over bridge.

All the accused are in jail since their arrest in March and April this year.

They approached the high court after the sessions court rejected their bail pleas.

On March 14, 2019, a part of the bridge connecting north-end of CSMT railway station to Badaruddin Tayabji Lane, known as the Himalaya foot-over bridge, collapsed and crashed onto the road, killing seven and injuring 30 others.