The doctor on duty at the men's wing of the Bareilly hospital refused to examine the newborn and referred her to the women's wing in the same complex. But there, the parents were told that there is a shortage of beds. They were told to go back to the men's wing.

The newborn's family members were seen weeping in the Bareilly government hospital complex.

An ailing newborn died without treatment in Uttar Pradesh, shunted between two wings of a government hospital, neither of which was ready to even examine her. For three hours on Wednesday, her desperate family ran between the male and female wings of Bareilly's Maharana Pratap Joint Hospital. The baby died in transit.

Chief Minister Yogi Adityanath tweeted that he has ordered the suspension of the presiding doctor of one hospital wing and initiated departmental action against the official in-charge of the other.

Born on June 15 in a private hospital in Bareilly, Urvashi had developed breathing problems. Her father and grandmother took her to the government hospital on Wednesday morning. The doctor on duty at the men's wing refused to examine the child and referred her to the women's wing in the same complex. But there, the parents were told that there is a shortage of beds. They were told to go back to the men's wing.

"We were made to run around for over three hours, because they simply refused to admit her. Finally, we decided to take her back home, but she died on the hospital stairs," said Kusma Devi, the child's grandmother.

Instructions directing the parents from one hospital to another in the campus are recorded in the child's medical slip. 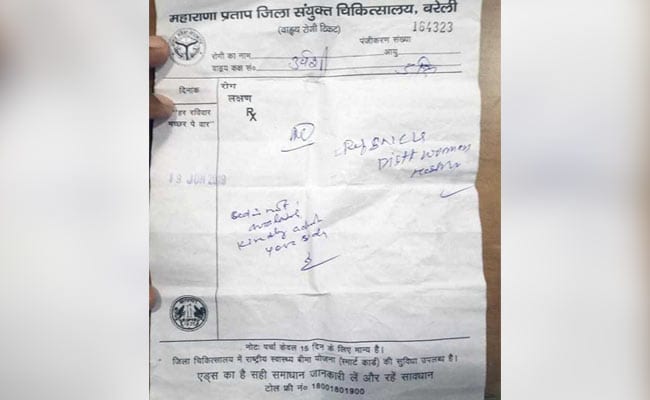 The child's medical slip recorded remarks of rejection from both hospitals.

An altercation between doctors of the two hospitals followed as both refused to take responsibility for the baby's death. Cellphone videos from locals and journalists show Dr Kamlendra Swaroop Gupta, in-charge of the men's wing, and Dr Alka Sharma, in-charge of the women's wing, trading accusations.

The suspended doctor, Kamlendra Swaroop Gupta, claimed that the hospital would have treated the baby had she only reached emergency first. When she did, the family was asked to get her admitted, he said.

"The baby was taken to the OPD (outpatient department) by the parents. From there, she was referred to the SNCU (specialised child care unit) at the women's wing. They probably said something and the family kept wandering around. Had they reached the emergency, we would have treated her," said Kamlendra Swaroop Gupta. "When they finally reached emergency, doctors asked that she be taken downstairs for admission," he added.

The women's wing claimed they were short of beds and infrastructure.

The hospital had eight children on four warmer beds -- which help maintain a newborn's body temperature -- Dr Alka Sharma said. "We told the family to go back to the men's wing. The staff at the men's wing just blindly refer everyone here. But all our equipment, like warmers, have been returned to the government. We have four warmers and we had eight kids on them already. If warmer beds were available, we would have admitted the child," she said.

"I have ordered suspension of the CMS of the Male Hospital Bareilly on the negligence of duty and have ordered for departmental proceedings against CMS of Women Hospital. Any insensitivity by Govt. officials will not be tolerated in #NewUP," Uttar Pradesh Chief Minister Yogi Adityanath tweeted on Wednesday night.

"The action was taken after a critically sick child was brought to Male Hospital, where sufficient paediatricians were available, but instead of stabilising the child and giving due treatment, he turned family away to Women Hospital. CMS of Women Hospital referred child back," the Chief Minister said in another tweet.

The action was taken after a critically sick child was brought to Male Hospital, where sufficient paediatricians were available, but instead of stabilising the child and giving due treatment, he turned family away to Women Hospital. CMS of Women Hospital referred child back.

Uttar Pradesh, the country's most populous state, faces a severe shortage of government doctors and hospital beds. According to the centre, the average number of people served by each allopathic doctor in the state comes up to 19,962. This number is second only to Bihar, where the average number of people served per doctor is 28, 391. The national average comes up to 11,082 people per allopathic doctor, over ten times the 1:1,000 ratio recommended by the World Health Organisation.

However, as the statement from the Uttar Pradesh government shows, negligence - not staff shortage - cost Urvashi her life.