The Shree Swaminarayan Mandir in Ahmedabad has been re-opened for devotees from today ahead of Navratri, which starts on October 17 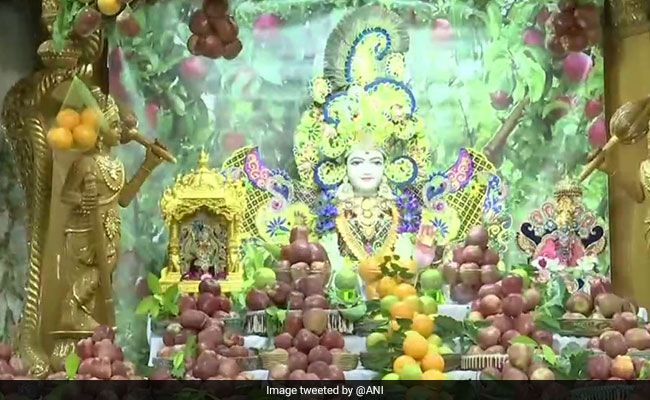 Around 3,000 kilograms of apples have been displayed for offering to the deities at the Shree Swaminarayan Mandir in Ahmedabad. The red, green and golden apples have been displayed as small triangles on the floor before the gods and on the steps leading up to the seat of the idols. The apples have also been decorated on special wooden steps built on either side of the gods. The Shree Swaminarayan Mandir has been re-opened for devotees from today ahead of Navratri, which starts on October 17. The famous temple, which is also a popular tourist destination, was closed after the countrywide Covid-forced lockdown was announced in the last week of March.

"After puja, the apples will be distributed among COVID-19 patients and healthcare staff," news agency ANI quoted a priest as saying. Nar Narayan Dev and Laxmi Narayan Dev are the two prominent deities at the Shree Swaminarayan Mandir. There are several Swaminarayan Temples across the world but the one in Ahmedabad is special as it was first to be built according to the instructions of Lord Swaminarayan, the founder of the sect.

Gujarat: Around 3000 kgs of apple put at display at Shree Swaminarayan Mandir in Ahmedabad; the temple has been re-opened for devotees from today.

A priest says, "After puja, the apples will be distributed among #COVID19 patients and healthcare staff." pic.twitter.com/6QmhkNLjsl

Temples in Gujarat are re-opening ahead of the nine-day Navratri but the state government has issued strict Covid-related rules for people. Navratri in Gujarat usually sees large gatherings, which can lead to a spike in infections in the state, authorities said. This year the famous Garba events will not be allowed. The pomp and grandeur associated with Navratri in the state will be largely missing. People can however hold small gatherings for praying to Goddess Durga during Navratri but with limited number of people. Citizens above 65, children below 10, pregnant women and people with comorbidities should avoid participating in any public programme during Navratri, the state government advisory said.