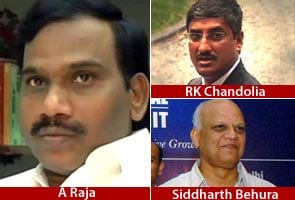 New Delhi: A day after their arrest, former Telecom Minister A Raja and two of his close aides will be produced in the Patiala House court in New Delhi today by the Central Bureau of Investigation (CBI). The agency is planning to seek Mr Raja's custody for detailed questioning. It has also invited Enforcement Directorate (ED) officials for a joint probe. The three spent the night at the CBI headquarters.

Raja's party DMK is, however, standing by him for now. Expressing its confidence in his innocence, the party declared today that his arrest doesn't mean he's guilty. "The DMK is like an open book on this issue," the party said after an important meeting of its senior-most leaders in Chennai.

On Wednesday, hours after he was summoned to the CBI headquarters for questioning, Mr Raja was arrested for his alleged role in the 2G spectrum scam. Also arrested were two men who worked closely with Mr Raja - R K Chandolia, who served as his Personal Secretary, and Siddharth Behura, who was Telecom Secretary.(Read: Key Raja aides arrested)

The Congress quickly asserted that the arrest of the DMK leader will not impact its alliance with Mr Raja's party in Tamil Nadu; the BJP focused on describing the action against Mr Raja as "too little, too late." (Read: Raja alone 'didn't gulp crores', says BJP)

And across the political board, all players agree that the arrest is an attempt by the government to rebut charges that it has not acted against corruption - a refrain of the Opposition over the last few months.

Mr Raja's arrest has been seen as a given in political circles for weeks now. He has been interrogated by the CBI four times since December, including on Monday.

His homes and offices in Tamil Nadu and Delhi have been raided; his diary and computers were seized by the CBI and are likely to be presented against him as evidence.

In 2008, Mr Raja, as Telecom Minister, sold valuable spectrum to telecom operators at prices that were determined in 2001; some companies that won 2G licences were new to the telecom sector, and sold some of their stake immediately for huge profits. The financial and procedural irregularities were pointed out almost immediately by the Opposition.

But it was only in November 2010 that the allegations seemed poised to push Mr Raja out of the Telecom Ministry. The catalyst was a report by the government's auditor - the Comptroller and Auditor General (CAG) - which declared that Mr Raja was guilty of colluding with companies he favoured to grant them mobile licences, even though they were ineligible and had in some cases lied or misrepresented information in their applications. The figure of Rs 1.76 lakh crore floated by the CAG as the value of the scam crushed any chances of Mr Raja's survival.

He was forced to resign, though he said in his defence that he had followed the policies introduced by his predecessors in the NDA government. He also said that by selling spectrum cheaply, he had delivered a country of mobile users - India's immoderate tele-density, he said, could be attributed directly to this.

Kapil Sibal, who replaced Mr Raja as Telecom Minister, described the CAG report as "completely erroneous" and said the government had suffered no losses on account of 2G allocation. On Wednesday, the BJP's Arun Jaitley said the fact that Mr Raja has been arrested neutralized Mr Sibal's claim. If the 2G process had been handled correctly, he asked, why was Mr Raja arrested?

Mr Jaitley also went on to target the Prime Minister, asking why he had kept silent for so long on the 2G scam when it was apparent that there were serious concerns about a senior minister in his cabinet.

The government has been accused repeatedly of shielding Mr Raja to protect its alliance with the DMK. At the Centre, the DMK is a key partner in the UPA coalition. In Tamil Nadu, the Congress props up the DMK government. And both parties have announced their partnership will continue for the state elections due to be held in May.

So far, the DMK has stood firmly by Mr Raja, stressing that it would take action against him only if he were found guilty in the 2G spectrum scam. In December, the party organised a series of rallies to project Mr Raja as a reliable and admirable leader.

Jayalalithaa won't let the DMK forget that. In the Tamil Nadu elections where she will confront the Congress-DMK alliance, Mr Raja gives her much ammunition. "This arrest only raises more questions than it answers...it seems to be a ruse to hoodwink the public and also to tell the Supreme Court that some action has been taken with regard to the 2G spectrum scam." (Read: Jayalalithaa's entire statement on Raja arrest)

The CBI's investigation into the 2G scam is being closely monitored by the Supreme Court on the basis of several petitions, including one filed by former Law Minister Subramanian Swamy. On multiple occasions, the CBI has been accused by the court of mishandling the inquiry.

The 2G scam has also turned into one of India's biggest political battles. The Opposition refused to let Parliament function during the Winter Session after the government refused to sanction a Joint Parliamentary Committee (JPC). The BJP has threatened that the Budget Session scheduled to start soon will see the same forces at work, unless a JPC is set up.

Promoted
Listen to the latest songs, only on JioSaavn.com
The government has argued that in addition to the CBI and the Supreme Court, the 2G scam is being studied by Parliament's Public Accounts Committee (PAC) which is headed by BJP leader Murli Manohar Joshi. Creating a JPC, it says, will only slow down the process of nailing who's to blame for the 2G scam. The Prime Minister has offered to appear before the PAC - Mr Joshi has said the offer will be considered at a later stage.

On Wednesday, Mr Jaitley said that the demand for a JPC has not been weakened by Mr Raja's arrest. "The JPC is on a much larger issue. Even on the culpability of Raja, now that they are admitting he prima facie did something wrong and arrested him, what was the Prime Minister doing when it was brought to his notice? So with such a track record of a cover up I don't think the government anywhere comes out in the clear," said Jaitley. (Read and watch: Why was PM silent, asks Arun Jaitley)