2G scam: Raja, Kanimozhi and others go on trial today 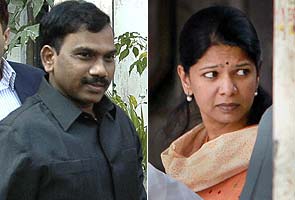 A Raja, Rajya Sabha MP Kanimozhi and the executives of some of India's biggest telecoms will stand trial for criminal breach of trust - a charge that carries a maximum sentence of life imprisonment. A Delhi court headed by Judge OP Saini had on October 22 accepted all the charges levelled by the CBI against the 14 individuals and three companies - Reliance Telecom, Unitech Wireless and Swan Telecom - listed as principal players in the 2G scam. The CBI's charges against them range from criminal conspiracy to forgery and cheating.

Top corporate executives of Reliance Anil Dhirubhai Ambani Group (ADAG) are likely to be first among the over 150 witnesses named by the CBI to be examined by the special court, set up exclusively by the Supreme Court to deal with the 2G case.

In the first list, the CBI has named 28 persons to be examined as prosecution witnesses before the court in the month of November.

As the trial begins, the spotlight will remain relentlessly on Mr Raja and Kanimozhi, the daughter of heavyweight Southern politician M Karunanidhi who heads the DMK, a major partner in the UPA coalition at the Centre. The arrest of his favourite child has tested the collaboration between the Congress and his party, though both sides have on record reiterated that their partnership is steady.

Expressing concern over the continued incarceration of his daughter Kanimozhi, Mr Karunanidhi yesterday said if courts "hesitated" to provide legal rights, it could cast a question mark on the country's democracy. "If courts, one of the pillars of Indian democracy, hesitated to provide legal rights and protect the basics of the law, a question will rise in everybody's mind where Indian democracy is going and about its future," he wrote in his party's mouthpiece Murasoli.

Mr Raja has been in jail since February. Telecom executives like Sanjay Chandra of Unitech Wireless and Gautam Doshi, Hari Nair and Surendra Pipara of Reliance Telecom were imprisoned in April. Kanimozhi was arrested in May. (In Pics: A-listers in Tihar)

Because the charges framed now, the 14 people accused may have a better shot at leaving jail. All of them except Mr Raja have already applied for bail. The CBI, which had opposed two petitions by Ms Kanimozhi for bail in the past few months, did not fight her latest request. However, that was turned down by special judge OP Saini on November 3. The Rajya Sabha MP has now appealed against that verdict in the Delhi High Court. That plea is likely to be heard on December 1.

The telecom scam was webbed, according to the CBI, in 2008 by Mr Raja when he was Telecom Minister. He ignored advice, including from the Prime Minister, to auction second-generation or 2G spectrum. Instead, he allotted licences and accompanying second-generation or 2G spectrum on a first-come-first-serve basis that were twisted to help companies Mr Raja allegedly conspired with.  The minister set a deadline for filing applications in September 2008; in January 2010, he made a last-minute announcement that licences would be given to those who filed their "Letters of Intent" first. The deadline for filing these documents and cheques was within hours of Mr Raja's revision of rules. A few companies like Swan and Unitech were ready with their cheques - the CBI believes they had been tipped off by the minister. And amid a fair amount of chaos, 122 licences were issued to nine companies at a cost of Rs. 1600 crores each.

Swan Telecom allegedly repaid Mr Raja with a 214-crore cheque routed through a maze of companies to Kalaignar TV, a local channel in Chennai. Kanimozhi and her stepmother own 80 per cent of the channel. Kanimozhi's lawyers have said the money was a loan which was returned with interest, and that she was not involved with the daily management of the company. The CBI has contested this, describing her as "the active brain" behind Kalaignar. The agency has said it has uncovered the money trail for this bribe.

Mr Raja, like the others accused, has rejected all charges against him. In his defence, he said that the Prime Minister, and P Chidambaram who was Finance Minister at the time, were kept informed of his plan of action. If they disagreed with his guidelines, he has challenged, they could have over-ruled him. He has also threatened to call the PM as a witness.

The telecom scam hurtled the government into crisis mode, when the government's auditor declared the scam had cost India Rs. 1.76 lakh crores, forcing a reluctant Mr Raja to resign as Telecom Minister. The CBI has said it believes the losses are in the range of Rs. 30,000 crores. The government's regulator for telecom policy - TRAI - has said it does not believe there were any losses since it does not believe spectrum should have been auctioned.

Many of the CBI's heftiest accusations have been contested by the government. For example, the CBI says the three Reliance executives in jail  - Gautam Doshi, Surender Pipara and Hari Nair- set up Swan Telecom as a front for their company to collect more spectrum and licences than were legally permissible. But the Law Ministry has said that after examining the details, Swan cannot technically be considered "an associate" of Reliance.

The CBI alleges both Swan and Unitech Wireless made huge profits by buying their 2G licences cheaply and then selling stake to foreign partners at huge profits. Telecom Minister Kapil Sibal has said that the transactions were legal because "what occurred was dilution of equity and not the sale of equity."

Like Mr Sibal, who infamously declared in January this year that the telecom scam had not caused any losses to the national exchequer, the government's regulatory body for telecom- TRAI - has undermined the CBI by stating that it does not believe spectrum should have been auctioned.  Any losses calculated, TRAI insists, are prone to error because they are based on presumptive market conditions and prices.

The CBI has also said in court that it has not found any evidence of a kickback from Mr Chandra's Unitech Wireless to Mr Raja.

The 2G trial commences at a time when the country is in the mood to hold politicians accountable for the rot that has been backlit by a series of swindles. The net worth of the 2G scam allows it to grab top spot on that list. The anti-corruption movement headed by Gandhian Anna Hazare delivered such massive crowds that the Opposition has quickly scrambled to appropriate the agenda, with LK Advani of the BJP launching a rath yatra to promote "clean governance."

Mr Raja's repeated references to the Prime Minister and P Chidambaram have echoed within all Opposition parties who say the PM must take accountability for allowing the telecom scam to play out. A document from the Finance Ministry, prepared this year, caused a political seizure - it said Mr Chidambaram could have enforced an auction of spectrum when he was Finance Minister and Mr Raja was busy mapping out a crooked policy.

The excavation of that document by a Right to Information activist allowed the Opposition to demand with more surety the resignation of Mr Chidambaram, who is now Home Minister. A week after the document was presented in the Supreme Court, Finance Minister Pranab Mukherjee clarified it was prepared with inputs from different ministries, and that he did not agree with all of its inferences. Various petitioners like Janata Party President Subramanian Swamy have said the Supreme Court should order the CBI to investigate Mr Chidambaram's role. Though the CBI has said this is not needed, the Supreme Court has yet to indicate its stand.

The Complete List of those accused in the 2G scam