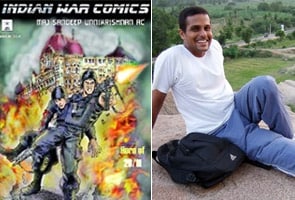 Mumbai: He perhaps couldn't run faster than a speeding bullet or clear tall buildings in a single bound. But no one would doubt that 26/11 martyr Major Sandeep Unnikrishnan was a real-life hero. And very soon you will be able to read the tales of courage of this braveheart on your mobile handset or at the click of a mouse.

Gurgaon-based Aditya Bakshi, an officer in the Merchant Navy, has released Braveheart of Mumbai, a 52-page comic book that details Sandeep Unnikrishnan's valour while he was fighting Ajmal Qasab's associates in Taj hotel two years ago. This is a part of the series that began in 2008 with a comic on Kargil martyr Capt Vikram Batra followed by one on Col N J Nair.

Aditya, son of Major General (Retd) G D Bakshi, feels it is very important for everyone to know about these real-life super heroes.

"My first comic was a black and white but around 10,000 copies were sold which inspired me to go ahead. In our latest series we have used the best available graphics and colours. Two young students Sony Thokchom (penciller) and Dipak Prajapati (colourist) assisted me," he said.

"We narrate the story to the parents first and ask for details. Then we contact the respective units to gather more information. Then starts our work of designing and creating graphics for them," explained Aditya.

The book not only chronicles the sequence of events that culminated in Major Unnikrishan's tragic death, it also brings out little-known facets of his personality and personal life.

"Did you know that Major Unnikrishnan had a premonition about his death? He had told a few of his friends some days before the fateful day that the nation would remember the way he died," said Aditya, who worked on this project when he was on a break from his job.

Aditya has been making the rounds of schools to popularise his comics.  "We are planning to start a campaign 'Adopt a Hero' where we'll go to schools and colleges with senior defence personnel and will narrate their stories which will create awareness about their valour and courage," said Aditya.

Promoted
Listen to the latest songs, only on JioSaavn.com
Soon all the comics would be launched on the digital platform. A Japanese company has shown interest in making an iPhone application of the comics in English and Japanese.

Major Unnikrishnan was the team commander of 51 SAG deployed in the operation at the Taj Mahal Hotel to rid the building of terrorists and rescue the hostages. He entered the hotel in a group of 10 commandos and reached the sixth floor through the staircase. Major Unnikrishan led his team from the front and engaged the terrorists in a fierce gunfight. He was shot from the back, seriously wounded and succumbed to injuries.