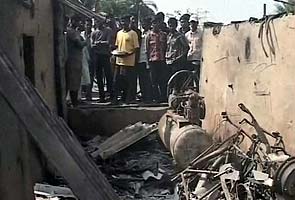 Canning: At least 200 houses were burnt in West Bengal's Naliakhali village by a mob protesting a religious leader's death. 52 people have been arrested in connection with the arson, police sources said.

A cleric was robbed and shot dead at around 2:00 am on Tuesday in Canning in South 24 Parganas district. The police reached the spot at dawn, but did not collect the body as they were waiting for some clerics to arrive.

According to some locals, at about 10 am in Tuesday, at least 10,000 people descended on the village and started indulging in arson. Outnumbered with no reinforcement, the police were unable to stop the arson.

"There were 30-40 police when the situation was still simmering. But they wouldn't take the body," Biswajit Adhikari, a resident of the village, said.

Govindo Adhikari, whose house was burnt, said they had to flee after they were chased by the mob. When they returned, they found everything burnt.

"We fled with the children. When we came back, we saw everything was burnt," Mr Adhikari told NDTV.

Promoted
Listen to the latest songs, only on JioSaavn.com
Locals said that some NGOs distributed food, medicines in the village. The government has announced compensation of Rs 10,000 each to 93 people who were affected in the rampage. The cleric's family has reportedly been paid Rs 3 lakh as compensation.