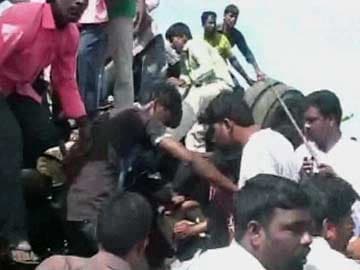 Medak, Telangana: At least 17 children were killed after a train crashed into their school bus at an unmanned railway crossing in Telangana on Thursday morning. The bus driver, who was allegedly on the phone and did not stop to check if the way was clear, was also killed.

Nearly 40 children of a private school, mostly below 11, were in the bus when the accident took place in the Medak district, 70 kms from the state capital of Hyderabad. After the bus was hit by the train, witnesses say it was dragged about a kilometre down the tracks.

The police say 21 children have been injured and hospitalized in Secunderabad 60 km away. The bus cleaner and the father of one of the children, who collapsed on reaching the site, also died.

As rescue workers tried to pull out the children, parents sat with bodies in their laps, many mothers holding the children they had prepared for school just an hour before. One mother was seen kissing her child repeatedly.

Schoolbags and water-bottles lay scattered under the mangled remains of the bus as hundreds of people sat and mourned, not all related to the children.

The driver, a temporary, had allegedly taken the shorter route instead of one that had two proper, manned railway crossings.  The train was traveling from Nanded in Maharashtra to Hyderabad in Telangana, which was carved out of Andhra Pradesh last month.

Promoted
Listen to the latest songs, only on JioSaavn.com
The accident sparked anger among local people, who say they have been asking for gates to secure the railway crossing in the district. In Parliament, Railways Minister Sadananda Gowda faced loud protests as members demanded to know why safety was neglected.

About 15,000 people are killed each year while crossing the tracks on India's vast but decrepit railway network, according to a government safety panel. Two years ago, the panel recommended that more bridges and overpasses be built on priority.