The bhajan speaks about humanity, empathy and truthfulness, qualities that Gandhiji stood for throughout his life. 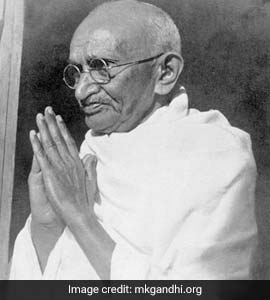 Vaishnava Jana To: The bhajan is said to be a favourite of Gandhiji (File)

A Kashmiri version of the popular bhajan; "Vaishnav Jan To" is being released on the 151st birth anniversary of Mahatma Gandhi on Friday to spread the message of peace that has eluded the region for the past 30 years.

The bhajan, a 600 year old devotional poem by Gujarati poet-saint Narsinh Mehta in the 15th century, speaks about humanity, empathy and truthfulness, qualities that Gandhiji stood for throughout his life.

This is why activist Kusum Koul Vyas, who collaborated with popular Kashmiri singer Gulzar Ahmad Ganei and writer Shabaaz Hakbaari, wants to release it on the 151st birth anniversary of Mahatma Gandhi.

"It is originally a Gujarati song and so not many people are able to understand what it really means. I thought if I can get this song translated in Kashmiri language, then maybe the message of peace and harmony will reach the people. Maybe some of them will start thinking about this song and why Gandhiji liked it so much," she told PTI.

The bhajan is said to be a favourite of Gandhiji and was often played at his prayer gatherings to spread the message of peace and harmony.

Over the years, it has seen many renditions by popular artistes like Gangubai Hangal, Pandit Jasraj and Lata Mangeshkar but it is for the first time that a Kashmiri version is being released, she said.

Ms Vyas, a Kashmiri Pandit, who has been advocating about the cause of Kashmiri Pandits at various forums, conceptualised and produced the new version of the devotional song with the motivation to send positive vibes to the people of Kashmir.

It was during the coronavirus-induced lockdown when Ms Vyas, who like everyone, was cooped up in her home in Ahmedabad, decided to start working on the song.

"I called up Kashmiri singer Gulzar Ahmad Ganei. He is famous all over the world. I asked whether he would like to do it and he immediately agreed. I initially thought that he was not serious about it. But he told me about writer Shabaaz Hakbaari for the translation of the song."

For Mr Hakbaari, the original song has a universal appeal and he extensively worked with Ms Vyas to develop the Kashmiri version.

"I listened to various renditions of this song before I started my work. And through that, I completely understood what the original writer, Narsimh Mehta, wanted to say to the listeners. I understood how one can become a compassionate human being and what all qualities he/she should have," the writer said.

Though the song was written over 600 years ago, Mr Hakbaari said it is relevant even today.

"We worked on this for over two weeks. Sometimes she would modify the lyrics and sometimes I would try something different. I translated as per the rhyme scheme of the original song."

It was then recorded by Mr Ganei, one of the most popular Kashmiri folk artistes and a recipient of a Sangeet Natak Akademi award.

Mr Ganei said he agreed to record the song as he wanted to spread the message of peace in the Valley.

"There is an inherent love for Gandhi among the Kashmiri people. They have always loved him for what he did for humanity. This love will stay on forever. The message is the same that bapu gave in 1947 and it is about peace. He never talked about anything else, other than that we should all live peacefully and with each other," the singer said.

Mr Ganei said one can achieve nothing if they are propagating hate.

"Kashmiri people are welcoming even today. Yes, there was a bad time in between and some bad things did happen. What can we do about it? It is all written in our destiny. I'm 61-years old today and I have seen some good days and some bad days.

"But our new generation, they have only seen bad days. So it is important that we should all talk about love."

Ms Vyas said the song was entirely shot in Kashmiri Valley, including at the Shankaracharya temple in Srinagar.

"Ganei made a lot of effort for this song. The vision I had for it, he executed it perfectly. I'm really happy with it."

Ahead of the song's release, Ms Vyas has only one wish -- that Kashmir returns to its old glory when it was a place where everyone was living in harmony.

"We want peace to return to the Valley. Gandhiji died fighting for peace and non-violence. He always talked about Satyagraha. Those people who are involved in violence, they must understand that their actions are affecting the Valley.

"Whoever is moved by this song, they should think about where we are and what has happened in the last 30 years. How to go back to that peaceful Valley where lakhs of tourists would throng every year?" she added.

Man Robbed Of Rs 22 Lakh At Knifepoint In Mumbai: Cops