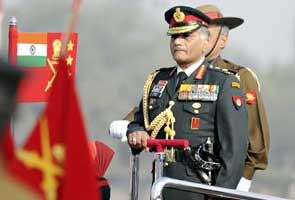 New Delhi: The Prime Minister has met with senior ministers Pranab Mukherjee, AK Antony and P Chidambaram to discuss the twin controversies that have emerged from the Army Chief's office. Crisis One is based on General V K Singh's disclosure that he was offered a 14-crore bribe in 2010 to clear "sub-standard" trucks for use by the Army. Crisis Two lies in the leak of a confidential letter written by the General to the PM where he warns that India's security is at risk because defence equipment is obsolete. Both issues have led to the Opposition demanding an explanation from the government.

"These issues are being examined in the Ministry of Defence. Our defence preparedness has always been strong and our government would ensure that this strength is preserved," Mr Antony told Parliament today.

The revelation about the bribe that was offered to him has led to an immediate escalation of hostilities between General Singh and Defence Minister AK Antony. The minister has blamed the General for not taking action after a retired defence officer visited his office and offered him a kickback. Mr Antony told Parliament that he did not commission an inquiry because the chief did not submit complaint in writing.

The chief will today, sources say, challenge the version of events offered by the minister.    They say that he refused to give an important position to Lieutenant General (retd) Tejinder Singh, the alleged lobbyist who offered him the money. The chief also refused the middleman's request to purchase 1600 "sub-standard" Tatra trucks that are used to transport artillery and troops.

Speaking to NDTV yesterday, the retired officer said that he had not offered the Army chief any money and that their meeting focused on his possible nomination as the head of the  National Technical Research Organisation (NTRO), a highly specialised technical intelligence gathering agency. General Singh's supporters say that he did not sanction the appointment. They also say that the chief did not allow the army to buy the new consignment of trucks from BEML, a defence Public Sector Unit that supplies Tatra trucks and other equipment to the army.

Though Tejinder Singh has denied offering the chief any money, a taped recording of the conversation allegedly exists. The CBI which was ordered on Monday to investigate the controversy, has denied that it received this tape yesterday. It's not clear who recorded the meeting between Tejinder Singh and the chief. Press Trust of India cites sources to state that the chief can be heard shouting on the tape.

The CBI met the Army chief on Monday but he will record his formal statement when he returns to Delhi after an official tour.

General Singh and Mr Antony spent most of last year engaged in a public battle over the army chief's age. General Singh wanted Army records amended to reflect that he was born in 1951 and not 1950, which is his year of birth according to the government. The issue could have affected when he would have to retire. General Singh became the first serving military chief to take the government to court but he withdrew his petition after Supreme Court judges suggested they would not be able to rule in his favour. General Singh will step down at the end of May.