12 Dead In Rain-Related Incidents In Gujarat

While the rains abated during the day, Gujarat has so far received 106.78 per cent of its annual average rainfall, the official said. 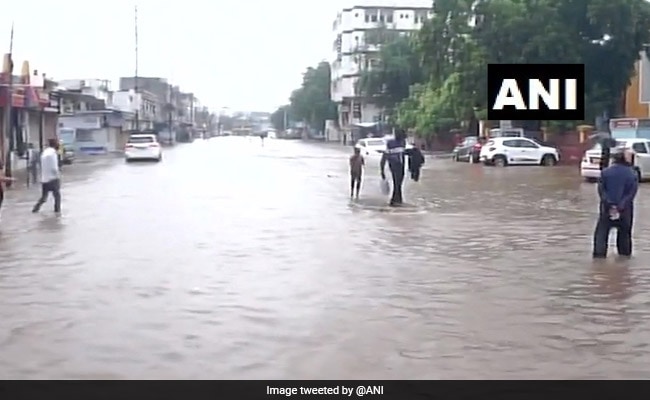 Gujarat has so far received 106.78% of its annual average rainfall, the official said.(FILE)

Nearly 1,400 people were evacuated from inundated areas while 12 persons died in rain-related incidents in Gujarat since previous evening, a state official said on Tuesday.

While the rains abated during the day, Gujarat has so far received 106.78 per cent of its annual average rainfall, the official said.

Heavy rains in catchment areas have filled to the brim 90 out of 205 dams in the state, while 70 dams have reached over 70 per cent of their total storage capacity, he said.

At least 17 tehsils in Kutch and Banaskantha districts received between 17 to 67 mm rainfall between 6 am and 4 pm on Tuesday, the State Emergency Operation Centre (SEOC) said.

Although the intensity of showers decreased, rescue and relief operations continued in rain-battered regions as teams of the National and State Disaster Response Forces evacuated people stranded due to flooding.

In Rajkot, 30 farm labourers trapped in a field on the banks of the Bhadar river were evacuated to safety by the SDRF on Tuesday morning, an SEOC official said.

289 persons were rescued and 1,358 shifted to safer places, most of them in Surendranagar, Rajkot and Kutch districts.

Several parts of Surat were flooded due to rainfall over the last two days and water was yet to recede from these areas which did not receive any showers on Tuesday, the official said.

As many as 12 persons lost their lives in rain-related incidents such as drowning and house collapse, he said.

While three persons drowned in Morbi district, one death each was reported from Dang, Jamnagar, Junagadh, Tapi, Kutch and Amreli districts, the official said.

A man died in a wall collapse incident in Patan, while two more died in other rain-related accidents, he said.

A high alert has been issued for areas downstream of 138 dams from which water is being released.

Copious rains have prompted farmers to sow more this kharif season. Sowing has covered 82.98 lakh hectares so far, which is 97.78 per cent of the three-year average, officials said.

The India Meteorological Department (IMD) has forecast heavy to very heavy rains at isolated places in Banaskantha, Valsad, Navsari and Kutch on August 29 and 30, and light to moderate rainfall at many places over the next five days.

India Should Be Bigger Than China In Power And Scope: RSS Chief Mohan Bhagwat