As many as 17,000 people have been forced to take refuge in 327 relief camps, and 3,000 villages are underwater because of the floods.

As many as 17,000 people have been forced to leave their homes due to the floods.

Eighty-year-old Bano Khatun looks at her village in Barpeta, one of the worst-hit districts in Assam, and her eyes well up with tears. Her home has been washed away and the crops in her fields laid waste by one of the worst rain-related disasters witnessed by the state in recent times.

A widow, she used to stay with her son, daughter-in-law and granddaughter before the floods arrived. Though they are all housed in a relief centre now, Bano Khatun came back to see what remained of their property. The sight that met her eyes wasn't very encouraging.

"Water came in the dead of night and washed away my home and crops. We have seen several devastating floods in the past, but we rebuilt everything. But the water came in a rush this time, leaving us homeless. What's worse, the government is doing nothing about it," she tells NDTV. 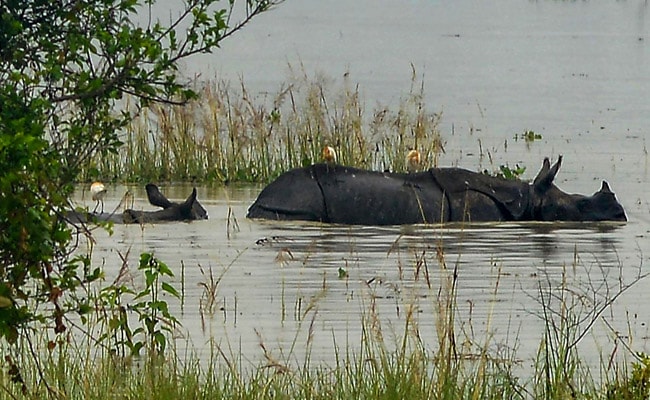 A large part of the Kaziranga National Park, home to the endangered one-horned rhino, has come under water.

Meanwhile, the flood situation is turning grimmer by the day. Over 26 lakh people across 28 of the state's 33 districts have been affected so far, and 17,000 forced to take refuge in 327 relief camps. As many as 3,000 villages have gone underwater as the water level in 11 rivers of the state - including the Brahmaputra - has breached the danger level.

Meanwhile, floods and landslides triggered by the heavy rain have claimed 11 lives so far, with four deaths reported just today. There's no respite in sight either; the Met department has predicted more rains in Assam over the next two days.

Farming activities have been badly hit too, with over 87,000 hectares of agricultural land across the state getting submerged. In some areas, farmers have returned to salvage whatever they can from their fields. "I came back hoping that at least some of the crops would still be standing. At least I could have used it to feed my family then," lamented Surjot Ali from Kalgachia in Barpeta.

State authorities said that rescue work is going on at full swing. "Rescue workers are working round the clock, and Rs 56 crore has been released towards relief and rehabilitation," said Assam Additional Chief Secretary Kumar Sanjay Krishna.