In a train accident today near Kanpur, several coaches of the Indore-Patna express derailed.

Kanpur: More than 100 people were killed and nearly 200 injured as 14 coaches of the Indore-Patna Express ran off the tracks near Kanpur in Uttar Pradesh today. The number of deaths could rise, officials fear.

The incident took place at around 3 am near Pukhrayan, about 100 km from Kanpur, at a time when most of the passengers were asleep. Television images showed several severely mangled coaches piled up against each other and rescue workers trying to cut through the crumpled metal.

Northern Central Railways spokesperson Vijay Kumar said that doctors and senior railway officials reached the spot soon after the accident and rescue operations were underway. The cause of the accident was not known immediately. 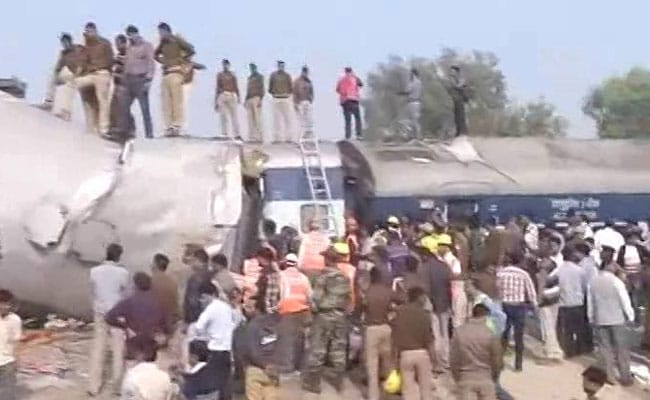 Several coaches of the train were severely mangled.

Daljeet Singh Choudhary, a senior police officer, told NDTV that heavy machinery including gas cutters were being used to rescue trapped passengers. "It is a delicate situation," he said.

Most of the casualties are reported from two coaches which are severely damaged, officials said. Stranded passengers were being taken to a nearby station from where a special train will eventually take them to Patna. Services were disrupted and several trains on the route were cancelled due to the accident.

Prime Minister Narendra Modi said he had spoken to Railway Minister Suresh Prabhu who was monitoring the situation closely.

Anguished beyond words on the loss of lives due to the derailing of the Patna-Indore express. My thoughts are with the bereaved families.

Rescuers and medical staff from the Indian Army were helping in the relief operations. Union Home Minister Rajnath Singh said that the National Disaster Response Force has been also been sent in.

Promoted
Listen to the latest songs, only on JioSaavn.com
Railway Minister Suresh Prabhu tweeted about the accident saying an inquiry had been ordered into the incident and announced compensation for the victims. "Strictest possible action will be taken against those who could be responsible," he said.

Enquiry team will start investigation for cause of accident immediately All necessary assistance provided to the affected,We r taking care