Read inOther Languages
This Article is From Jan 01, 2020

Skoda Superb Bursts Into Flames At Petrol Pump In Hyderabad

The car, a black Skoda Superb, caught fire when driver went to washroom while his car was being refuelled. 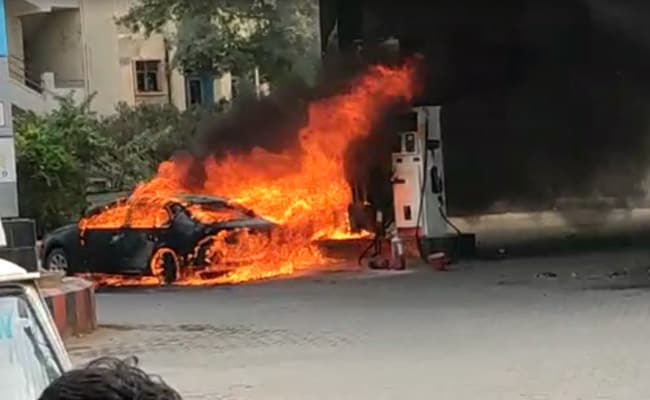 A car burst into flames while refilling fuel at a Hyderabad petrol pump, dramatic visuals of the incident showed. No casualties were reported. The Skoda Superb stood dangerously close to the fuelling machines as huge plumes of thick black smoke were seen in the sky.

The black sedan caught fire when driver went to washroom while his car was being refuelled. "Petrol spilled over and because the vehicle was overheated after a long distance drive. As the car went up in flames, the driver and owner ran away from the area. The pump management reacted quickly and called 100 and fire service. Both reached within 5-10 minutes. The staff also helped and we were able to control the damage and prevent this from becoming really big," a police officer said.

The fire eventually spread through the gas station, but was contained by the five fire engines which rushed to the spot soon after the blaze was reported. Visuals showed the Skoda Superb engulfed in a ball of flame which spread to the fuelling machines. The car was completely damaged and several passers-by, standing at a distance, were seen shooting videos of the fire as the fire-fighters contained the blaze.

"The incident took place after a car which was being filled at the pump caught fire. The fire then spread through the bunk to the station. It has been doused now," the police said.

The petrol pump has been closed for operations, and the management is yet to ascertain the damage in monetary terms.