The Financial District Road is said to be one of the best in the city, and IT professionals say it would not have required any maintenance for the next three to four years.

IT professional Ramanjeet Singh rented a horse and rode it on the road in Hyderabad.

Hyderabad: After their online campaign to protest against a stretch of road being dug up in Hyderabad failed to attract the attention of tech-savvy IT minister KT Rama Rao and the municipal administration department, a group of techies have taken up an innovative method to register their protest - ride horses to work.

The Financial District Road is said to be one of the best in the city, and IT professionals say it would not have required any maintenance for the next three to four years. Despite that, they say the Greater Hyderabad Municipal Corporation or GHMC have pushed for the road to be converted from tar to concrete, and so has been completely dug up, forcing commuters to choose alternate routes which can also lead to a delay of up to two and a half hours.

Ramanjeet Singh, an IT professional, who rented a horse and rode it on the road to register his protest, says "Just about a couple of years ago, footpath and central median was laid with crores of money. Why this mindless act of more money down the drain is what we are asking." He adds "If the white topping was so important, there are so many roads full of potholes. Any one of them could have been taken up." 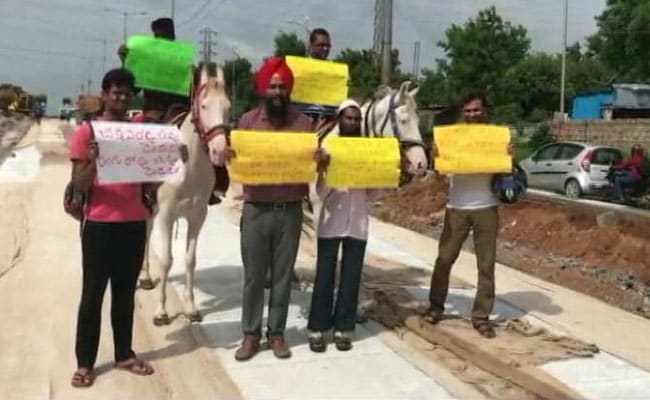 The IT professionals were protesting against the digging up of roads in Hyderabad.

Mr Singh was joined by nearly two dozen other techies for the protest on Friday morning.

The techies point out that ironically the minister and the top officers in GHMC had said no digging would be undertaken during the monsoon season. Then why an exception was made in this case, they ask.

"The road is one of busiest road in Cyberabad. They should have known it will take at least six months, why haven't they planned alternate routes," they ask.

The pressure to finish the job soon has had the contractor dig up the entire stretch whereas the road could have been dug up and done in parts, so as not to inconvenience commuters, the protestors say, adding, "Already alternate roads via Nanakramguda road and Nallagandla road are getting clogged. Traffic moves slowly and there is a real danger of life-threatening potholes."

"If the work continues for the next three to four months, it is going to be torture every single day, torture for all commuters. Can you imagine the wastage of crores in terms of fuel, the pollution, long hours of driving that will increase back and neck problems," another regular on this road points out.

The IT employees first started tweeting with the hashtag "#whythiskolavari" but the social media campaign was met with silence from the authorities.

Promoted
Listen to the latest songs, only on JioSaavn.com
"We will continue our online satyagraha and will come up with innovative campaigns to tell the authorities that they cannot take the citizens for granted," they said.

The government is yet to respond to any queries on why the road is being redone.