Raja Singh used what appeared to be a stone to hit himself on the head while the police tried to stop him, a video of the incident has shown. 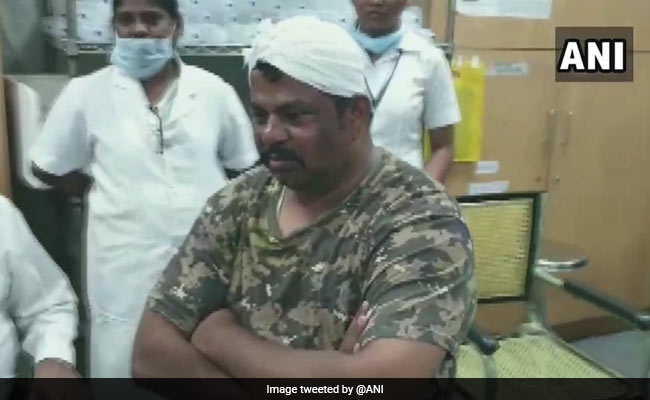 T Raja Singh is the MLA from Hyderabad's Goshamahal constituency.

T Raja Singh, the lone BJP legislator in Telangana, is not a stranger to run-ins with the police. But on Wednesday night, the lawmaker allegedly took the acrimonious relationship with the law-keepers to the next level by injuring his head and then blaming them.

According to reports, Mr Singh was trying to move a 20-foot statue of freedom fighter Rani Avantibai from Hyderabad's Jummeraat Bazaar to the Goshamahal area when he was stopped by the police last night around 2 am. The BJP leader is the Member of the Telangana Legislative Assembly from the Goshamahal constituency.

A huge commotion followed after which Raja Singh got himself admitted to a hospital and a medical report was made public, along with visuals of the lawmaker with a bandage on his head. Mr Singh blamed four police officers for the injury and his medical report said it was caused after he was hit with wooden sticks.

A video has however emerged that suggests that Raja Singh used what appeared to be a stone to hit himself on the head while the police tried to stop him.

"He is seen hitting himself with this stone on the head and we believe this is what caused the injury," said Deputy Commissioner of Police (West Zone) AR Srinivas. He said if the police had used force, others would also have injured too.

He said Raja Singh, who reached there with about 200 supporters, misbehaved with the police and used foul language. "They also manhandled few of our police officers and in the process they forcibly installed the statue, which is an illegal act," he said.

The police officer said a case was filed against those who tried to remove the statue illegally and manhandled the police. The accused were charged with unlawful assembly, obstructing and assault on public servant and promoting enmity between different groups.

Last month, Raja Singh was stopped and taken into custody by Hyderabad's police commissioner Anjani Kumar when he tried to get into Hyderabad's Amberpet to stop the rebuilding of a mosque that had been demolished and had led to communal tension in the area.