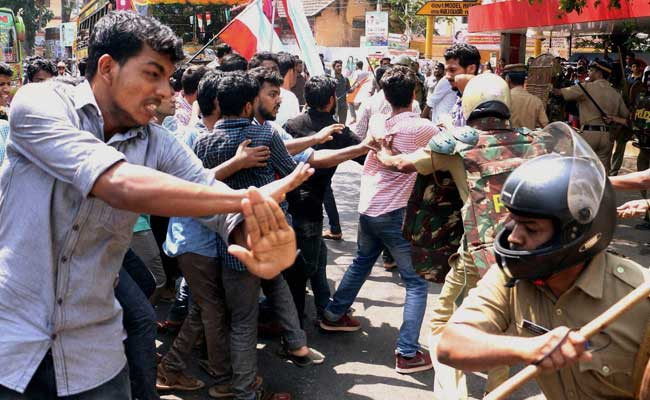 Hyderabad: Around 55 teachers from the Hyderabad Central University have taken a one-day mass leave to protest the police charging batons on students and the return of Vice Chancellor P Appa Rao to office.

The teachers who have launched the protest include around 40 from scheduled castes and schedule tribes.

How the police evicted them has been harshly reviewed by a team that included human rights activists and lawyers who found that women students were threatened with rape, and that Muslims were referred to as "terrorists" by the police.

The police have also been criticised for arresting 25 students and two faculty members.

The Telangana government has not opposed bail for the group that was arrested and Chief Minister K Chandrasekhar Rao has said he will ask Prime Minister Narendra Modi to remove the Vice Chancellor.

That is one of the leading demands of a section of students who have composed a group called the Joint Action Committee which says the Vice Chancellor is guilty of persecuting Mr Vemula, driving him to hang himself in his hostel a month after he was suspended from classes.

A month before he died, Mr Vemula wrote a letter to Mr Rao, plaintively describing insidious caste discrimination against Dalits on campus. Students say instead of helping him out, the official went ahead with suspending Mr Vemula for allegedly assaulting members of a rival student group affiliated to the BJP.