The derelict condition of the building has raised panic among staff. Some can be seen donning helmets with a placard saying 'Unsafe Zone'.

Doctors at the Osmania General Hospital in Hyderabad held a protest on Friday trying to draw attention towards the dilapidated condition of the biggest government hospital in Telangana.

Many doctors have been wearing helmets during their work hours, as there have been multiple instances where chunks of roof of the hospital have fallen endangering the safety of patients, doctors and other staff members. At least five people have been injured.

Doctors say they will protest for an hour every morning as part of the protest. Some were seen working outdoors.

The derelict condition of the hospital - a 100-year-old heritage building - has raised concerns and panic among the staff. Some were seen donning helmets within the premises, with a placard saying 'Unsafe Zone'. 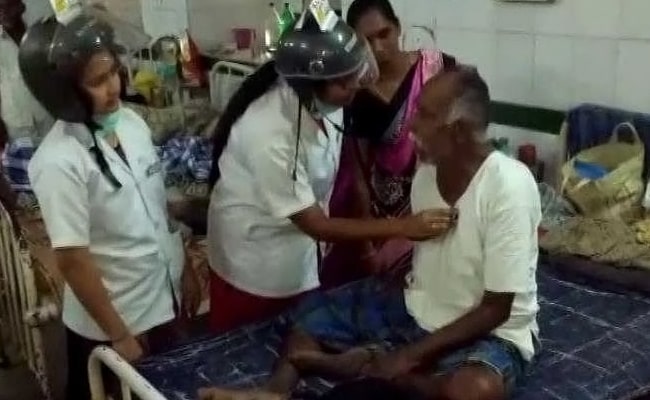 Interestingly, only the doctors and some paramedical staff can be seen wearing the safety head gear while patients were left to their fate.

Raising their concerns, the joint action committee of doctors said, "After four months, no action has been taken and now it is a caretaker government. Who will take action now?"

In 2015, Chief Minister K Chandrashekhar Rao had proposed demolishing the building and shifting the hospital to new premises, but activists and architects had opposed the move suggesting repairs and renovation of the hospital complex.